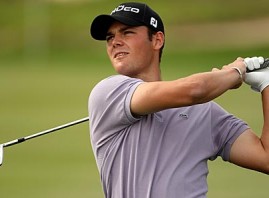 It was apparent going into this weekend’s PGA Championship at Whistling Straits that the tournament was a wide open affair, so it wasn’t surprising that it produced a first time winner.  Martin Kaymer outlasted Bubba Watson in a three hole playoff to earn his first major victory in what was a bizarre finish to four days of competition at the Wisconsin golf course on the shores of Lake Michigan.  Watson finished second ahead of third place Rory McIlroy and  Zach Johnson . There was also a tie for fifth place between Jason Dufner and Dustin Johnson.

Kaymer earned $1.35 million for his win, and golf betting enthusiasts who backed him in tournament futures betting also enjoyed a nice payday.   Kaymer was a +4500 choice to win the PGA Championship, the #13 choice in a wide open pre-tournament futures market where favorite Phil Mickelson was +1000.  Tiger Woods was the #2 choice at +1200 and finished well off the lead.  Second place Bubba Watson would have produced a considerably smaller profit for his backers had he prevailed in the playoff—Watson was priced at +300 as part of the ‘field’.

The outcome was in doubt until the very end of the tournament, with six golfers holding the lead at some point on Sunday.  Furthermore, six players were within one shot of the lead in the final 30 minutes of regulation play.  One of those was Dustin Johnson, who appeared to be headed to the playoff against Kaymer and Watson until he was assessed a two shot penalty for the very innocuous offense of grounding his club in a bunker.  Johnson tried to make sense of the decision that dropped him from a tie for the lead into fifth :

“Walking up there, seeing the shot, it never once crossed my mind that I was in a sand trap. It’s very unfortunate. The only worse thing that could have happened was if I had made the putt on that last hole.”

Kaymer, on the other hand, was savoring his victory:

“I don’t realize what happened. I just won my first major. I’ve got goose bumps just talking about it.”

Though he had some sympathetic words for Johnson:

“I don’t know if sad is the right word, but i was a little bit shocked about Dustin Johnson. Can you imagine if he made that putt on 18? He would have thought he won the golf tournament.”