You are here: Home Horse Racing 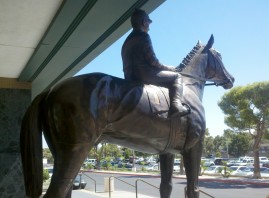 Perhaps the most fascinating thing about horse racing–or more specifically the betting component of the sport–is its complexity. To be successful a handicapper has to deal with countless interlocking variables and other ‘moving parts’. Pedigree, past performance, class of opposition, workouts, jockeys and weather are just a few of these. Once a handicapper understands how each individual horse will perform on a specific track he has to figure out how these horses will compete against each other–to do that the

The Triple Crown horse racing season gets underway this weekend with the running of the Kentucky Derby at Churchill Downs in Louisville, Kentucky. While ‘unofficial’ betting odds have been available for quite some time now thanks to futures betting markets

I’ll Have Another Getting Ready For Run At Triple Crown

The Belmont Stakes is set for Saturday, the field has been finalized and post positions assigned and the opening betting odds have been released. The only thing that remains is for the race to be run and all eyes will

With I’ll Have Another poised to become the first Triple Crown winner since Affirmed in 1977 the Belmont Stakes has already attracted an incredible about of interest from the mainstream sports media and casual fans. It’ll also attract a ton

I’ll Have Another Racing For Immortality In Belmont Stakes

The Belmont Stakes is a big deal every year, but this year the third race of the Triple Crown will attract more interest than usual. I’ll Have Another enters the race as the winner of both the Kentucky Derby and

Heading up to the Kentucky Derby sharp horse players had their eye on I’ll Have Another. One turf writer quipped that I’ll Have Another Was the ‘Rodney Dangerfield of thoroughbreds’ in that like his comedic predecessor he received ‘no respect’.

Thoroughbred horse racing is one of the oldest sports in existence, dating back to the chariot races of ancient Rome. The first horse racing track in the United States was opened in 1665, and the sport flourished until the early part of the 20th century. In the early 1900’s, a growing anti-gambling sentiment slowed the growth of horse racing. This setback was short lived, however, and with the advent of parimutual wagering in 1908 the sport began to grow anew. From that point until World War II horse racing was arguably the most popular sport in America, rivaled only by baseball. In the 1950’s and 60’s, its popularity slipped somewhat in the face of the myriad sports options presented by the new medium of television. Despite many challenges, horse racing still attracts a devoted audience of betting enthusiasts. Don’t miss out for Breeders Cup betting opportunity at BreedersCupBetting.org that’s all set to take place in 1st week of November this year.

Part of horse racing’s historical popularity as a betting sport has been the diversity of bets available. Like sports wagers or casino games, you can either bet on simple, low odds “straight” bets or more exotic wagers with a higher potential payoff like exactas or perfectas.

The basic wagers are the “win”, “place” and “show” in which you wager that a horse will finish first, second or third respectively. If you bet the horse to win, it has to finish first. A “place” bet will cash if your horse takes first or second. A “show” bet wins if your choice finishes first, second or third. Obviously, the win bet pays the highest rate of return followed by the place and show

Another popular exotic bet is the multi-race wagers like the “Daily Double” where you need to pick the winner in two separate races. Along the same lines are the ‘pick four’ or ‘pick six’ where the horse betting enthusiast must pick the winners in four or six consecutive races with a greater return for a successful wager.