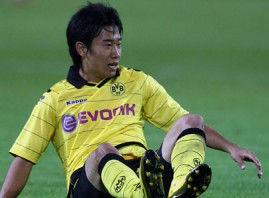 Group D Villareal 3-0 Dinamo Zagreb: Villareal kept it chances at advancing alive and even managed to overtake two teams for first place heading into its final group match. Guiseppe Rossi scored twice with a Marco Gaston Ruben score in the middle. The Spanish side now needs just a draw to guarantee advancement while Dinamo must win its final match against PAOK. PAOK 1-1 Club Brugge: PAOK blew a golden opportunity to wrap up a spot in the next round

Group A Manchester City 3-0 SV Salzburg: Mario Ballotelli finally struck big in European competition with a goal on either side of halftime before Adam Johnson tallied the final goal in the 78th minute. City moves on to round two

All matches will be played Thursday, Dec. 2 (Home team listed first; team points in parentheses) Group A Manchester City (7) vs. Salzburg (2): Look for Manchester City to make quick work of the Austrian side in a must-win match

Group G: Zenit St. Petersburg (1st, 12 pts.) Again, it can be plenty surprising seeing a solid team take care of business in European competition. If you need an example just look at Barcelona’s pedestrian efforts in a weak Champions

If a tournament was ever going to feature surprise teams it would be the one featuring 48 teams in the first group stage! There’s nothing inherently wrong with so many teams, but there’s a reason – other than the average

The UEFA Europa League competition has existed under that name only since 2009, but its lineage dates back much further. It was originally organized in 1971 as the UEFA Cup and you’ll still hear it referred to by the old name on occasion. It is considered the second tier European football club competition after the Champions League. The format of the event is very similar to the Champions League, with the field comprised from teams from the big European football leagues. Typically the top three finishers in the national leagues play in the Champions League with the fourth through sixth finishing teams competing in the Europa League. The Europa League also draws participants from countries without a high level professional infrastructure and/or smaller countries—countries as tiny as San Marino and Andorra are included in the field. In some cases, teams can qualify for both the Champions League and Europa League but when this happens the higher level competition takes precedent and another team is chosen for the secondary event.

Since the event was rebranded as the Europa League, there has only been one winner—Spanish side Atletico Madrid beat English Premier League entrant Fulham to take the title. Three teams have won the UEFA Cup on three occasions—Italy’s Juventus and Inter Milan and England’s Liverpool. Seven teams have won the UEFA Cup twice, with sixteen more teams winning once. The Europa League also has its own musical theme– the Paris Opera under the direction of composer Yohann Zveig recorded the song that is played before every game in the competition.

Although the Europa League tournaments are followed closely by fans of the participating teams, it has nowhere near the mainstream popularity of the Champions League. This is also reflected in sportsbook wagering on the event—for football betting fans and oddsmakers alike it attracts only a fraction of the interest of the more prestigious European Cup tournament or even betting on the league games in the individual countries. Current Europa League betting odds favor Manchester City to take the title, followed by Liverpool, Porto (Portugal) and CSKA Moscow.