You are here: Home NBA 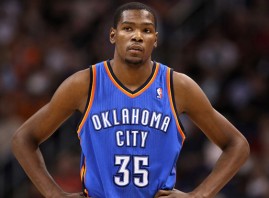 With the 2013 draft in the books and free agency winding down, most NBA teams are finished rebuilding and retooling for the upcoming season. It’s still early in the summer and much can happen between now and October, but that

The ripple effects of Dwight Howard bolting to Houston are being felt by several teams throughout the NBA, most notably his former team, the Lakers. The pleas of an injured and attitude challenged Kobe Bryant weren’t enough to convince Howard

Ever since Yao Ming and his broken feet limped away from Houston in 2011, the Rockets have been searching for a suitable replacement. Dwight Howard would qualify as more than suitable, providing Houston’s brain trust can lure “Superman” to the

It’s no secret that the 2013 NBA free agent list isn’t chock full of grade A talent. Once the Dwight Howard recruitment tour reaches a destination, the last of the superstar household names will be off the market. This doesn’t

Now that Chris Paul has inked a $100 million deal with the Clippers, and Dwight Howard is being wined and dined by no less than five teams, the rest of the league is left to dip into a shallow pool

The National Basketball Association is the second most popular professional league among North American sports betting enthusiasts. Founded in the mid 1940′s, the NBA is considered to be the highest level of basketball play in the entire world. The NBA consists of 30 teams (29 in the USA, 1 in Canada) that play an 82 game regular season beginning in October and ending in April. That is followed by the NBA playoffs, in which the top 16 teams in the league via for the championship. Historically, the Los Angeles Lakers and Boston Celtics have been the dominant NBA teams. Between them, they’ve won 33 championships (Boston 17, Los Angeles 16). No other franchise has won more than six titles.

The Kobe Bryant led Los Angeles Lakers are the current NBA champions, but are expected to face a stiff challenge this year from the Miami Heat from the Eastern Conference as they seek to defend their title. The Heat recently signed the NBA’s most sought after free agent, LeBron James along with Chris Bosh to compliment Dwayne Wade and is clearly a force to be reckoned with. The Lakers won’t have an easy time in their own conference either, with Portland, Utah, Denver and Phoenix all legitimate challengers for the Western Conference crown.

Many serious sports bettors consider basketball betting to be the best sport to handicap due to the long regular season and parity of talent. Most NBA games offer pointspread bets on the side, with over/under betting on totals. Home court is of paramount value in the NBA, with most teams performing significantly better on their own floor than they do on the road. Some teams even demonstrate a home/away bias with NBA totals, usually as a result of playing a more uptempo style at home and a more defensively focused style on the road.

Scheduling is also an important factor to consider for NBA basketball betting aficionados. The long season and grueling travel schedule obviously leads to fatigue, and this can be particularly evident in ‘back to back’ scheduling situations. Some teams handle these logistical issues better than others, but a sharp NBA handicapper can frequently find spots where good teams aren’t ‘ready to play’ on the road due to their travel schedule and make easy pickings for a less talented host.