You are here: Home MLB 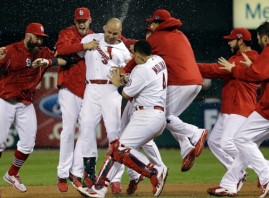 The Major League Baseball All Star break is over and the second half of the season is underway.  On Sunday night two teams looking to climb back into contention after a substandard start to the season will do battle as the Los Angeles Dodgers take on the St. Louis Cardinals in the ‘Gateway City’.   The Dodgers started slowly after their torrid late season run last year but thanks to improved play and the struggles of the San Francisco Giants they’re

The Arizona Diamondbacks are still technically in the hunt for the NL West title as they enter this game 9.5 games back of first place San Francisco but they haven’t been playing very well of late. Then again, neither has

The Atlanta Braves were fortunate to get out of their series with the Colorado Rockies with 3 wins against a single loss. After splitting the first two games of the four game set Atlanta won the final two contests by

The New York Yankees won on Wednesday night and combined with a Baltimore loss climbed back in to sole possession of first place in the AL East. That’s not much consolation, however, and the Yankees are playing their worst baseball

Short card of Major League Baseball action on Thursday but there are several important games on the board. In the National League the Atlanta Braves try to make up ground on the Washington Nationals atop the Eastern Division as they

The Cincinnati Reds are methodically pulling away from their NL Central rivals and they’ll look to put the Pittsburgh Pirates and St. Louis Cardinals further in their rear view mirror as they host the disappointing Philadelphia Phillies on Wednesday. The

With thirty teams playing 162 games a year, baseball may offer more potentially profitable betting opportunities than any other sport. Baseball betting is a favorite of serious handicappers due to the abundant statistics available on virtually every aspect of the game and the every day schedule makes popular among more casual players as well. From April to October there are opportunities to bet on baseball every day of the week, with many games scheduled in the afternoon.

MLB Baseball provides unrivaled opportunities for the sharp sports betting enthusiast due not only to the sheer number of games played every year but also by offering a variety of ways to bet on every game. The most commonly seen type of baseball odds is a moneyline play on the winner of the game. The specific baseball betting lines vary widely from day to day due to the won/loss record of the teams involved in each game, the starting pitching matchup, the recent form of the teams and other situational factors. For example, some teams hit left handed pitching better than others and such factors are factored into the MLB baseball betting odds by a given sportsbook as well as taken into account by handicappers.

Another popular baseball betting proposition is the over/under totals wager. This is similar to totals plays found in other sports, with the player choosing to go ‘over’ or ‘under’ a number of runs specified by the sports book. Baseball totals are a particular favorite of sharp players, who consider factors such as the pitching matchup, weather, ballpark configuration and even the relative humidity at game time.

While the moneyline and over/under total are the most common options for players to bet on baseball, most sportsbooks have added other types of wagers as well. Run lines are available at most sportsbooks where bettors can either play or take a certain number of runs (usually +/- 1.5) in the same manner as a pointspread football wager. More and more sportsbooks are offering baseball odds on the ‘first half’ of the game, with the result of the first 4 ½ innings of play determining the outcome of the bet. The thinking behind this type of play is that it allows the player to focus on the starting pitching matchup without worrying about a poor bullpen performance resulting in a losing bet. Other baseball betting propositions include plays on the outcome of each regular season series and a baseball equivalent of hockey’s ‘Grand Salami’ with betting ‘Over’ or ‘Under’ the total number of runs and/or home runs scored on a given day’s action.