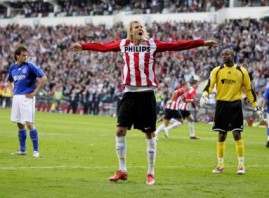 Group A
Manchester City 3-0 SV Salzburg: Mario Ballotelli finally struck big in European competition with a goal on either side of halftime before Adam Johnson tallied the final goal in the 78th minute. City moves on to round two while Salzburg is out.

Lech Poznan 1-1 Juventus: Despite a Vincenzo Iaquinta equalizer six minutes from time, Juventus was sent out of the competition. The Italian side needed a victory since a draw would leave it on the wrong side of a tiebreaker. Artjoms Rudnevs put Lech ahead in the 12th minute.
Standings: 1. Manchester City (10), 2. Lech Poznan (8), 3. Juventus (5), 4. SV Salzburg (2)

Group B
Rosenborg 0-1 Bayer Leverkusen: Sidney Sam scored the lone goal of the match in frigid conditions in the 35th minute as the German side secured the top spot in the group. Rosenborg is left to play for pride in its final group match.

Atletico Madrid 2-3 Aris Salonika: Reigning Europa League champions Atletico were left on shaky ground after surrendering a second-half lead to the Greeks. Sergio Koke scored his second goal of the match in the 51st minute to even the score and Nikos Lazaridis netted the winner in the 81st. Atletico now have to outdo Aris on the final matchday at Bayer Leverkusen.
Standings: 1. Bayer Leverkusen (11), 2. Atletico Madrid (7), 3. Aris Salonika (7), 4. Rosenborg (3)

Group C
Sporting Lisbon 1-0 Lille: Sporting earned a deserved three points thanks to an Anderson Polga goal to take the group with a match to spare. Lille must defeat Gent in their group finale to overtake them for second place.

KAA Gent 1-0 Levski Sofia: Gent moved into an advantageous position by securing the win with a 77th-minute goal from Fernando Wallace. A draw will be enough to send Gent through when it visits Lille.
Standings: 1. Sporting Lisbon (12), 2. KAA Gent (7), 3. Lille (4), 4. Levski Sofia (4)

Group G
Hajduk Split 1-3 AEK Athens: AEK picked up a key road victory when it struck for three goals after halftime from three different players. With the win, the Greek side needs only a draw to guarantee advancement in its final match. Hajduk Split is out of contention.

Zenit St. Petersburg 3-1 Anderlecht: Zenit continued its scintillating form in the competition by winning its fifth match in as many tries. Danny set up Aleksei Ionov and Alexander Bukharov to put the home side in control. Anderlecht needs to make up three points on the final matchday.
Standings: 1. Zenit St. Petersburg (15), 2. AEK Athens (7), 3. Anderlecht (4), 4. Hajduk Split (3)

Group H
Odense BK 1-1 Getafe: With both teams in dire need of a victory, Getafe saw a lead that would have kept its hopes for moving on alive equalized in the 91st minute when Henrik Andreasen. The draw eliminates both teams from the competition.

Group I
Metalist Kharkiv 2-1 Debrecen: Denis Oliynyk netted the winner three minutes from time to send Metalist through. The home side fell behind just after halftime on a Peter Czvitkovics goal, but Adam Bodi netted an own goal to let Metalist back in the match.

Sampdoria 1-2 PSV Eindhoven: Ola Toivonen polished off a brace in the dying moments of the match to send PSV through and knock Sampdoria out of the competition. Toivonen canceled out a Giampaolo Pazzini goal in the 51st minute to tie the score.
Standings: 1. PSV Eindhoven (13), 2. Metalist Kharkiv (10), 3. Sampdoria (5), 4. Debrecen (0)