You are here: Home Horse Racing I’ll Have Another Racing For Immortality In Belmont Stakes

I’ll Have Another Racing For Immortality In Belmont Stakes 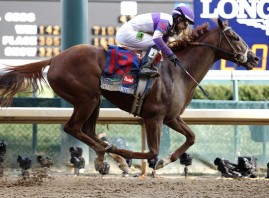 The Belmont Stakes is a big deal every year, but this year the third race of the Triple Crown will attract more interest than usual. I’ll Have Another enters the race as the winner of both the Kentucky Derby and Preakness Stakes and is poised to become only the 12th Triple Crown winner in history if he can win the Belmont.

The Triple Crown is arguably the most difficult challenge in all of sports. There have only been 11 horses to win the Kentucky Derby, Preakness and Belmont starting with Sir Barton in 1919. The great Seattle Slew won the Triple Crown in 1977 and Affirmed turned the trick in 1978. There has not been a Triple Crown winner since, a span of 34 years.

Further underscoring the difficulty of winning all three races is the fact that since Affirmed’s win in 1978 there have been eleven horses to win the Kentucky Derby and Preakness and head to Belmont with the chance to become a Triple Crown winner. Obviously these horses are 0-11 in their attempts. In the early 2000′s, War Emblem, Funny Cide and Smarty Jones won the first two legs in back to back years only to fall short in the Belmont.

So why is the Belmont such a difficult test for these equine athletes? There are several reasons, beginning with the 1 1/2 mile distance. For three year old races horses this is a monumental jump from the Derby distance of 1 1/4 mile and the Preakness distance which is slightly less than that. A horse with front end speed can win the first two legs of the Triple Crown and enter the Belmont with almost no chance from a tactical standpoint. Also, the schedule is brutal with only 5 weeks between the Kentucky Derby and the Belmont. Assuming a horse can handle the distance they’ve got to have enough ‘guts’ to deal with three races in five weeks–to put this in perspective, most high level race horses seldom race more than once a month in other circumstances.

Finally, there’s the pressure–horses obviously don’t deal with pressure in the same way that humans do but they’re very sensitive and perceptive animals. They can sense changes in their environment and there’s a good chance they’ll notice the difference if they were just another horse in the barn in April and now a rock star in early June. Some horses thrive on this–Zenyatta famously loved attention–but some horses don’t deal with it well.

All of this is what makes I’ll Have Another’s run at the Triple Crown so interesting. He’s a strong closer and doesn’t need to set the pace to win. He seems no worse for wear due to the daunting schedule–in fact, one of the knocks on him heading into the Derby was that he was so lightly raced beforehand. That could be working in his favor now. And while he may not be the ‘diva’ that Zenyatta was there’s been nothing to suggest that he’s not dealing well with all of the attention. The strong bid that I’ll Have Another should make in the race and the interest he’s attracted will make Belmont Stakes Betting 2012 one of the biggest years on record.