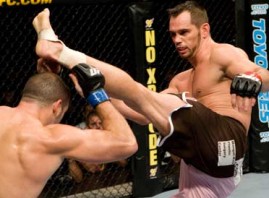 Rich Franklin first won the title from the late Evan Tanner in 2005, then defended it twice before losing it to current champ Anderson Silva. Franklin is coming off a stunning first-round knockout of fellow former champ Chuck Liddell at UFC 115.

Griffin won the light heavyweight title by split-decision from Quinton “Rampage” Jackson at UFC 86 and then lost it in his first defense against Rashad Evans at UFC 92. Most recently, Griffin won a split-decision over former champion Tito Ortiz.

Both fighters share an a common opponent in Anderson Silva, and both were knocked out brutally in the first round (Franklin lost by knockout in the second round as well in the rematch).