You are here: Home UFC & MMA Not One, But Two Title Fights Scheduled for WEC 53

Not One, But Two Title Fights Scheduled for WEC 53 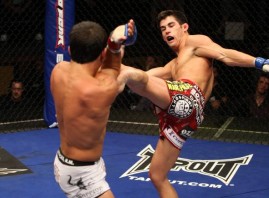 WEC 53 is looking to keep up with the tremendous standard that the promotion has been setting for itself by booking title bouts in both the lightweight and bantamweight division. Lightweight champion Ben Henderson will defend his title against recent reality TV star Anthony Pettis, and bantamweight champion Dominick Cruz will be facing burgeoning action fighter Scott Jorgenson.

Henderson last defended his title against Donald Cerrone with an early first-round guillotine submission back at WEC 48. He is undefeated in the WEC after five impressive showings.

Cruz won the title from Brian Bowles earlier this year and then defended it against Joseph Benavidez in August. Many have Cruz in their top ten pound for pound lists. His only loss was to Urijah Faber at featherweight in his last fight before moving down ten pounds.