You are here: Home UFC & MMA UFC 133: Evans vs. Davis Returns to the City of Brotherly Love in August

UFC 133: Evans vs. Davis Returns to the City of Brotherly Love in August 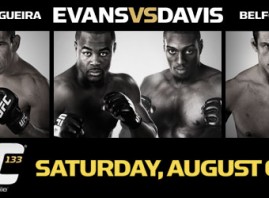 MMA enthusiasts in the Philadelphia area get their chance next week to snatch up tickets for the August 6 UFC 133: Evans vs. Davis event held at the Wells Fargo Center where former UFC Light Heavyweight Champion Rashad “Suga” Evans gets a chance to put himself in title contention as he takes on the up and coming Pennsylvania born star in Phil Davis.

“The last time we were in Philly, the fans were incredible so we are excited to head back there with a card that features three former world champions,” UFC President Dana White said. “Phil is undefeated at 9-0 and has never been more motivated for a fight, and he wants to prove that he belongs atop the light heavyweight division. Rashad is on fire. He wants his title back so badly he can taste it, but he knows before he can get his title shot he has to get through Phil. He wants to win and he wants to win impressively. This is a great fight.”

Evans (20-1-1), who now fights out of Boca Raton, FL, was the former The Ultimate Fighter: Season 2 winner which started his eventual run to becoming the 205 lbs. champion. Victims on his resume include Quinton Jackson, Chuck Liddell and Forrest Griffin. A win over Davis gets him one step closer to the coveted title he received following his big win over Griffin.

“My road back to the title continues in Philadelphia against Phil Davis and I expect this to be one of the best fights of the year,” Evans said. “Phil is on the rise in this sport and it’s my job to put an end to that. He’s a former national champion wrestler and he’s been impressive thus far in the UFC, but my experience in big fights gives me the edge. I want another shot at the belt and I’ve got to beat Phil to earn it.”

Undefeated rising star Phil Davis (fighting out of San Diego, Calif.) returns to his native Pennsylvania with plans to score the biggest win of his career. A Division I National wrestling champion in 2008, the former Nittany Lion Davis (9-0) has torn through the UFC’s light heavyweight division. With wins over the likes of Antonio Rogerio Nogueira and Brian Stann, “Mr. Wonderful” believes he’ll cement his place among the 205-pound best with a huge victory over Evans at Wells Fargo Center.

“I’m definitely glad to be back in Pennsylvania for the biggest fight of my life,” Davis, a Harrisburg native, said. “It’s going to be good to be able to fight in front of all my family and friends. I feel like I can take this fight wherever I want. I can wrestle with Rashad, I can strike with him, and I feel confident wherever this fight goes. Rashad Evans is the most dangerous opponent I’ve ever faced, but I don’t think for a minute that I’m outmatched. I’m going to take care of this fight and do whatever I have to do to beat Rashad.”

Former middleweight champion Rich “Ace” Franklin brings his versatile game and supreme conditioning back to the Octagon for a highly-anticipated clash with former PRIDE star Antonio Rogerio Nogueira in light heavyweight action. The 36-year-old Franklin (28-6, 1 NC) holds key victories over Chuck Liddell, Wanderlei Silva and Matt Hamill and will be put to the test against the 34-year-old Nogueira (19-5), a crisp boxer and Brazilian jiu-jitsu black belt who has posted wins over Vladimir Matyushenko, Alistair Overeem and Dan Henderson.

Proven knockout artist and former UFC champion Vitor “The Phenom” Belfort has long been touted as one of the most devastating and explosive strikers in history. Owner of wins over the likes of Rich Franklin, Randy Couture and Gilbert Yvel, the 34-year-old Brazilian Belfort (19-9) now gears up for a bout with Japanese superstar Yoshihiro Akiyama. Three straight “Fight of the Night” awards dot the record of the 35-year-old Akiyama (13-3, 2 NC) and he expects to earn a fourth when he meets Belfort in Philadelphia. The talented judoka, who trains alongside number one middleweight contender Yushin Okami, has defeated notables such as Alan Belcher and Melvin Manhoef.