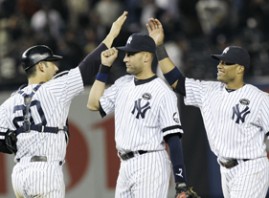 CC Sabathia returned to the form that has made him one of the best big-game pitchers of his generation on Wednesday.

The veteran left-hander used back-to-back home runs by Nick Swisher and Robinson Cano to lift the host Yankees to a 7-2 win over the Rangers.

The victory sends the series back to Texas with the Rangers leading 3-2. Righty Colby Lewis will face New York’s Phil Hughes on Friday.

New York is trying to overcome its first 3-1 postseason deficit 1958. Since the LCS went to a best-of-seven format, 24 of the 30 previous teams to take 3-1 series leads have won pennants.

Sabathia lasted just four innings in the opener, when he started on eight days’ rest and the Yankees rallied from a five-run deficit. Leads of 5-0 and 6-1 never seemed comfortable in this one as he allowed two runs and 11 hits — matching his season high — in six innings with no walks. His key outs came in the sixth, when the Rangers loaded the bases with one out.