You are here: Home NHL Evgeni Malkin Focused On Rehabing And Improving 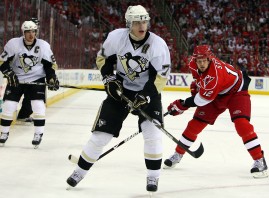 Although its the offseason, Pittsburgh Penguins star Evgeni Malkin doesn’t have time to sit on his laurels. He is in the middle of rehabing a serious knee injury, and the reports coming out of Russia is that he is focused like a laser beam on getting it back to normal as quickly as possible. The injury sidelined him for a good chunk of the 2010-11 season, and now his main goal is to get healthy.

Penguins strength and conditioning coach Mike Kadar is out in Russia working with Malkin. and says he is as committed as he ever seen Malkin. Kadar said “I have known ‘Geno’ (Malkin) for five years now and I have never seen him this committed to getting healthier and wanting to do well. It has been an eye-opener for me with his determination and work ethic. He is committed to it every day, and with no short cuts.”

Malkin 2010-11 season ended on February 4 when he tore the anterior cruciate and medial collateral ligaments in his right knee. To make matters worse mentally for Malkin, it was his first game back after missing time due to a left knee injury and a sinus infection. The 25 year old Malkin says he is expecting all the hard work this summer to pay off for him. He said “It feels better every day. It’s good, but not 100 percent yet, maybe 90. I’m skating it hard, but my knee feels good. Soon I will try (full speed). I push it more each day.”

Malkin says he is not only focusing on his knee, but wants to improve his conditioning and strength as a whole. He says he is in the gym twice a day, and most mornings he is running and swimming in Moscow. He also said his main workout partner is former teammate Sergei Gonchar. Malkin said “Kadar gives me drills and two practices a day. Kadar has coached me a long time. He knows my body. It’s hard work by myself and I don’t know all the fitness techniques. It’s more fun with him around. ‘Gonch’ is a big help, too. He’ll help motivate me when Kadar leaves.”

One thing is for sure, Malkin wants to improve on the numbers he has been putting up, and bring home the Cup with his team. The motivated Malkin said “I want to play my best for the team. I want to improve my skating, strengthen both my legs and become a faster skater. I want to be better for the whole year. I want to help my team with the Stanley Cup.”