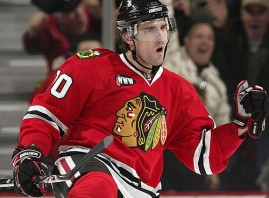 From Chicago Coach Quenville, all the way up to Vice President and General Manager Stan Bowman everyone was sick of answering the 64 thousand dollar question, Is Patrick Sharp playing in Chicago next year? It wasn’t just the media, it was players, front office staff, and of course every other league GM with a phone. The Hawks answered that question with the signing of Patrick Sharp with a 5 year contract extension. The new deal, which will begin with the 2012-13 season, is reportedly worth $5.9 million a year.

Then the question became, were they ever in serious discussions with other teams about Sharp, “No, honestly, it never went anywhere from there. You can ask the other GMs. They would always ask about him and I would just say, ‘No, we’re not trading him,’ and then move on to somebody else. It never went past that first question from them” Bowman said.

The 5.9 million will be a 2 million dollar raise from Sharp’s contract this year, and into next. Bowman said signing Sharp is a deal at any price, and its not just because of his ability on the ice. He said “There are too many factors outside of just what we see from his play on the ice. There’s a lot of other things that reporters and fans don’t see. He’s a very important player for our group here and for that reason he’s going to be here for a long time.”

Sharp said he had to learn to be patient, and trust everyone was doing the right thing. He also admitted that it was a relief to have this over and done with though. Sharp said “Getting this out of the way clears things up for me and allows me just to show up and be a good player and a great teammate and not focus on the individual stuff. The money is great and there’s no question about that, but I have a lot of faith and trust in my agent Rick Curran. He deserves a lot of thanks. I told him I wanted to stay in Chicago. I had no reason to leave. I let him handle the rest of it.”

Bowman also said that this isn’t one of those decisions that they made this morning, but that they have been planning it for along time. Bowman said  ”In a lot of ways this is a move we’ve been planning for a long time. There is no doubt about the fact that when you’re looking at which players are a big part of your success, we knew Patrick was part of that and we had to find a way to get it done. Sometimes you have to make moves, but we’ve been thinking of this for a while. It didn’t just sneak up on us. We’ve had a plan in place to make sure he would be here.”

Bowman concluded by saying that Sharp is a part of the fabric of the team, and thats something you just don’t trade away or trade for. He said “He’s a very likeable guy, so he fits in with different groups on the team. He’s able to help younger players along, because he was that player who broke into the League and he started off on the fourth line in Philadelphia. He’s kind of worked his way up and played a lot of different roles, so I think he can relate to people that way.”

Sharp will be a Blackhawk for a long time unless the economics go horribly for the Blackhawks, and even then he has a modified no-movement clause in the new deal. That’s the way Sharp wants it, and says he always wants to be a Blackhawk. He concluded “It’s something I thankfully won’t experience for the next five or six years. As players, you deal with a lot of outside distractions and clearly your own contract is one of them. The extension of the contract … when things are said and done, it might be 10 to 12 years as a Blackhawk. To me, that’s a heck of a career and hopefully it goes longer. But I definitely consider myself a Blackhawk and I don’t want to play anywhere else.”