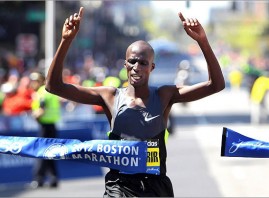 For those of you not paying attention, it’s Patriot Day in Boston. That’s why the Red Sox hosted the Rays in a game starting at the bararic time of 8:05 AM Pacific. It’s also the traditional running of the Boston Marathon which was won–like so many other years–by a Kenyan competitor. Wesley Korir overcame leg cramps and unseasonably high temperatures to battle back and win the 116th Boston Marathon in gutsy fashion.

At one point, Korir had to slow down and give up the lead:

“It’s hot out there, in case you didn’t know. I knew it was going to be hot, and one important thing that I had to take care of today was really hydrate as much as possible. I guess my biology degree kicked in a little bit.”

He didn’t panic when he started to cramp up:

Last year’s winner, Geoffrey Mutai couldn’t handle the heat. After setting a world record time in victory a year ago he dropped out early in this race complaining of stomach cramps. Mutai was hoping that a good showing would earn him a spot on the Kenyan team for the London Olympics but Korir may have scooped him:

“To me, I think running the Boston Marathon is an Olympic event. I don’t care what comes up after this, but I’m really, really happy to win Boston.”

New Englanders are ill equipped to handle hot weather and for that reason Boston Marathon organizers warned those that were inexperienced or ill to skip the race (not really sure why sick people would run a race in any condition, come to think of it). For those that did make the start officials made sure to have a lot of water on hand–in fact, twice as much water was given out as in a typical year. Leave it to a Midwesterner to make sense of all of this–Minnesota’s Mike Buenting has run 10 Boston Marathon races:

“You’ve got to know your own body. You have to know how to hydrate and the rest will take care of itself.”