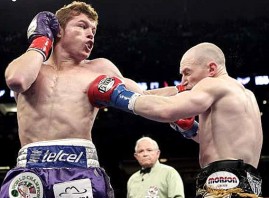 Saul “Canelo” Alvarez is without a doubt one of he most intriguing fighters that boxing has to offer. His nickname translates to cinnamon and was appropriately given to him because of his red hair. That along with his freckled face would understandably have one peg him to be from the Emerald Isle rather than his native Jalisco, Mexico. In addition to his appearance, the fact that he’s just 20 years old with 36 fights to his credit makes the ears of many fight fans perk up.

More importantly, the kid can flat out fight.

Up until a year ago, the 5′ 9″ wunderkind was one of Mexico’s best kept secrets. While many fight fans in the United States were watching the storied careers belonging to Mexican legends like Erik Morales and Marco Antonio Barrera come to an end, Alvarez was quietly making a name for himself south of the border at a very steady pace.

Having turned pro just a few months after his 15th birthday, Alvarez strung together a few wins before facing the only hiccup of his career to date being a four round draw against Jorge Juarez. Just a couple of years later Alvarez got his first taste of a championship as he picked up a regional strap in the form of the WBA Fedecentro welterweight title. Not long after that he made his United States debut as he outpointed Larry Mosley to pick up a ten round unanimous decision at the Morongo Casino Resort in southern California.

Last year he caught the eye of several American promotional outfits and eventually was signed by Oscar De La Hoya’s Golden Boy Promotions who immediately put him to work on the undercard of the highly anticipated clash between Floyd Mayweather and Shane Mosley providing Alvarez with the biggest audience of his young career. That night he survived a few shaky moments to come back and defeat Jose Cotto, older brother of current WBA junior middleweight champ, Miguel Cotto.

In the past year Alvarez stopped Luciano Ceullo in the sixth stanza to earn the WBC Silver 154 lb. title, then gained further exposure with big televised wins over former world champions Carlos Baldomir and Lovemore N’Dou via sixth round KO and a twelve round unanimous decision, respectively.

Just weeks before his most recent bout, it was announced that due to Manny Pacquiao dropping back down to the welterweight division to face Shane Mosley, his WBC junior middleweight crown would be vacated and ultimately be placed on the line when Alvarez stepping in to the ring to face Manchester’s Matthew Hatton.

From the moment the bell sounded to kick off the HBO televised main event it was apparent that Hatton, a career welterweight, was in over his head against the younger Alvarez. Nothing that the 29 year old Hatton landed seemed to have much of an effect on the bigger and stronger Alvarez. In fact, the only time Alvarez faced any sort of adversity in their 12 round clash was when referee Lou Moret deducted a point from Alvarez for hitting on the break in the seventh round.

Over the course of twelve rounds Alvarez utilized everything in his arsenal working both the head and body of the game Hatton. While impressive, the heart of Hatton would be the only thing to carry him through the fight as nearly 12,000 people cheered on the dominant performance of Alvarez.

Moments after the final bell rand to conclude the first championship fight of Alvarez’ career he was officially announced as the victor by way of a unanimous decision with all three judges scoring the bout 119-108 in favor of the Jalisco native.

With the win he was awarded the coveted WBC 154 lb. strap and became the youngest champion in history to win a championship in the junior middleweight division.

Immediately after the fight many fans were clamoring for a Mexican standoff between Alvarez and Julio Caesar Chavez, Jr. Although with the current icy relationship between Top Rank and Golden Boy Promotions that may just have to wait.

Having just fought days ago, it will be some time before any official word as to who, when and where Alvarez will be back in the ring against is handed down.

The one thing you can count on, however, is that whenever it is and whoever it’s against, the world will watch as the Saul “Canelo” Alvarez era has just begun.

And it promises to be an intriguing one.