You are here: Home Boxing Former Champ Mikkel Kessler Returns To the Ring June 4 in Denmark 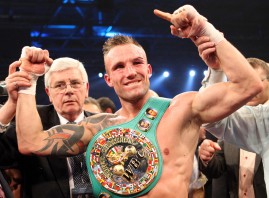 For the first time in over a year former WBC and WBA Super Middleweight Champion Mikkel “Viking Warrior” Kessler will return to the ring against Mehdi Bouadla on June 4 at Parken Stadium in Kessler’s birthplace of Copenhagen. The bout will be televised on Showtime Championship Boxing on a tape delay as the co-feature to the Carl Froch and Glen Johnson Super Six semi-finals matchup which will air live from Atlantic City.

After entering the tournament as one of the favorites to win, Kessler (43-2, 32 KOs) found himself on the receiving end of a boxing clinic at the hands of Andre Ward ultimately leading to an eleventh round technical decision loss giving Ward the WBA strap that Kessler previously held. Kessler bounced back in his stage two bout as he fought his way to a close but unanimous decision over Nottingham’s Froch to pick up the WBC’s version of the super middleweight crown.

Despite his title winning efforts Kessler announced that he would have to bow out of the Super Six World Boxing Classic with a nagging eye injury. At the time it wasn’t clear just how severe the injury was with some speculation that it would prematurely end the career of the two-time champ.

Such isn’t the case however as he looks for a win over France’s Bouadla (23-3, 11 KOs) to get himself back in line for another crack at a world title.

The 29-year-old Bouadla has won 11 in a row dating to February 2008. The No. 5-ranked super middle in the World Boxing Organization (WBO) and 10th-rated contender in the International Boxing Federation (IBF), Bouadla earned a decision over Pavels Lotahs in his most recent start last January. Bouadla was slated to challenge defending champion Sebastian Sylvester for the IBF middleweight championship, but the fight was postponed after Sylvester suffered a viral infection.

The Super Six announce team of Gus Johnson, Al Bernstein and Antonio Tarver will call the Kessler-Bouadla match from Atlantic City . Steve Farhood will serve as ringside reporter from Denmark.