You are here: Home Boxing Showtime and HBO World Championship Weigh In Results 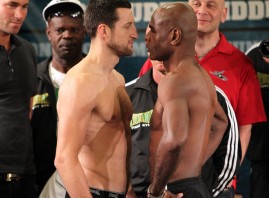 It’s a busy weekend for boxing as Showtime Championship Boxing presents a split site double header as Carl Froch puts his WBC Super-middleweight title on the line against the battle tested veteran in Glen Johnson at the Boardwalk Hall in Atlantic City.

The co-feature to that bout will take place earlier in the day and then be presented via tape delay as Mikkel Kessler makes his long awaited return to the ring in his native Copenhagen, Denmark where he takes on Mehdi Bouadla in a ten round bout.

On the other premier boxing network, HBO’s Boxing After Dark series will feature undefeated WBC Middleweight title holder Sebastian Zbik as he’s set to do battle with the unbeaten Julio Cesar Chavez, Jr. from the STAPLES Center in Los Angeles. Opening up that telecast will be a clash between fast rising featherweight Mikey Garcia as he takes on Rafael Guzman.

All weights are as follows: