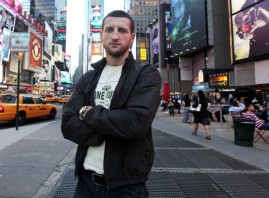 In just under two weeks WBC Super Middleweight Champion Carl “The Cobra” Froch will put his coveted title on the line against veteran Glen “Road Warrior” Johnson in the second of two semi-finals matchups to determine who will move on to take on finalist and WBA king Andre Ward in the finals.

The June 4 bout between Froch and Johnson will be held at the Adrian Phillips Ballroom at Atlantic City ’s Boardwalk Hall in Atlantic City , N.J. Showtime will be airing the fight live on location with Ward serving as a special guest analyst.

Earlier today both participants in Froch and Johnson along with event promoter Lou DiBella hosted a nationally media teleconference.

Here are some of the highlights from the call:

“I’m in great shape and have been in New York for the better part of two weeks which should give me plenty of time to get acclimated to this fight. It’s quite hot and humid but it’s the same in England . I should be getting the time difference out of my system here over the next few days and just look forward to the fight next week. I can’t wait to put on a great show in the Super Six Semifinals.

“As far as I’m concerned I’m an unbeaten fighter coming into this fight. I still consider myself unbeaten. That loss (against Mikkel Kessler) was maybe a little injection or a kick in the ass, whatever you want to call it, to get me back to where I was when I became champion against Jean Pascal when he was firing on all cylinders because he didn’t look like he was the other night. He let that fight slip away from him (against Bernard Hopkins) and didn’t seem to be in condition. Since that fight (against Pascal) I’ve only fought against top opposition: Jermain Taylor, Andre Dirrell, Mikkel Kessler, Arthur Abraham and now Glen Johnson.

“I come into this fight very, very confident and very strong. I’m in my prime. I’m 33 years old and fitter than I’ve ever been. I’m quite meticulous and a perfectionist about my workouts and training regime. I’m hitting times on my runs that I was hitting when I was 26, 27 years old. I’m doing the same amount of push-ups and sit-ups and pull-ups all in the time frame. I’m just feeling really, really fit and like I did when I fought Arthur Abraham. Never mind 12 rounds I can go 25 rounds right now. That’s how great I feel. I’m looking forward to this fight and I’m looking forward to putting a show on.”

You’ve had three fights and Green slipped in with one against a substitute fighter in the Super Six. Do you think that will make a difference in this fight?

“I’ve had three fights but I made easy work of two of them. I made easy work of Andre Dirrell. I’ve done more damage shaving myself than what Andre Dirrell did. And against Arthur Abraham I made easy work of that. I mean the only fight that was hard work was the Mikkel Kessler fight and that was my own fault. I stood in front of him for four or five rounds and made a fight of it which I shouldn’t have done and there’s reasons why I did that. I don’t think we should worry about how we got to this stage of the Super Six but the fact is we are here and in the Semifinals and I’m sure it means just as much to Glen as it means to me and it’s just as important to him. So we’ll forget about the past and worry about the here and now.

“I don’t want to talk too much tactics but the plan is always to hit and not get hit. The one thing about Glen Johnson is I don’t think I’ll have to go looking for him. I don’t think he’s going to be on his back foot looking to jab and pick me off. He doesn’t have the speed or the skill to match me. So he’s going to come straight ahead.”

What do you think about Andre Ward?

“He’s got some skills. He’s an Olympic gold medalist but having that doesn’t win world titles all the time and we’ve seen that recently. These top amateurs don’t always make top pros. He’s obviously won some great fights and he beat Mikkel Kessler which is a fighter I was close to so he’s got that. But other than that if you look at his record I haven’t been too impressed with him as far as who he’s fought or how he’s won. Ward’s definitely a threat and someone I have to take seriously but I know I can beat Ward. One thing he’s lacking is punching power and that’s a big factor in the professional ring.”

Will you be boxing Johnson or will you be looking to use your power punches?

“I’ll do a little bit of both. I’ll box around him and jab, chop, jab, chop with a lot of combinations. I don’t think it would be wise for him to sit in front of me for too long. If he walks into me he’s going to be taking on some shots. We’ll see how much the referee thinks he can take. It’s going to be brutal if he keeps walking forward and taking shots. He’s only had one fight at super middleweight and that was against Allan Green who is not a super middleweight, he’s too tall and too big. I watched that fight and Allan Green was dead from round two and three and he managed to take Glen to eight rounds. I’m going to be fresh and fit and strong and powerful with fast combinations from round one to round 12. I really wish this fight was 15 rounds.

“I think I’ll get my vengeance against Glen Johnson. He’s a great fighter and a war horse and I won’t disrespect him. He really knows what he’s doing but I would have rather fought Mikkel Kessler just purely for the revenge. I’m a warrior myself. It’s a big thing for me to have lost that fight against Mikkel Kessler because I’m serious about this business and that blemish on my record, I’d love to get that corrected before I retire. Someday after I hang them up I want to be able to say I lost that decision to Kessler but I won it back. I’ve avenged that defeat. I think if he fights (Lucian) Bute in Montreal he’ll lose but if he gets it in Denmark I think he’ll win so let’s hope he gets that fight in Denmark .

“The final person to hold the Super Six Cup will have withstood the test of time. This tournament has given boxing fans and the press a lot to talk about and has given us a lot of fights that might not have happened. So it’s been a great thing. There’s been some negative things but all that negativity is totally unnecessary. It’s been a fantastic tournament with some top-level fights and fights that would not have happened. Big accolades have to go to Ken Hershman and all of the promoters and Lou DiBella who has had three fighters in this tournament.”

How you fought any one in your career style-wise like Carl Froch?

“Not really. He’s a tall guy that really kind of fights short sometimes. But in his last fight he actually fought tall and used his reach and boxed the way he’s supposed to box and the way he’s built to box. I’ve boxed tall guys before but never guys who have scrunched down and tried to be a short guy. But we are prepared for either style that he shows and we’re looking forward to an exciting fight.

“My advantage is being Glen Johnson. I think I know boxing inside and out. I’m going to go in there confident and use my skills to my potential and you’ll see me come out victorious. Carl Froch is a great fighter and I have no disrespect toward him. This is a business and I’m going in there to win the fight. All the talk and all the other stuff goes out the window. This is for all the marbles so we’re going in there to win the fight.

“I wish I would have listened to my manager a long time ago and gone down there (to super middleweight) sooner. But I think things happen for a reason. I’m just really, really excited for this opportunity.”

Why did you resist your manager?

“The main reason is that I didn’t think I would be able to maintain that weight. I always felt like super middleweight wasn’t who I was and I didn’t want to put the strain on to make that weight.

“I’m not concerning myself too much with what Carl Froch’s plan is or what he’s going to do to be honest with you. I’m more concerned with what I’m going to do. I’m focused on my game plan and what I have to do. I have a winning formula and I don’t think Carl Froch is the one who can tell me different.”

Are you approaching this fight like a last-chance fight?

“I definitely feel a little bit of urgency for this fight. I mean, I’m not getting any younger. I’m not going to take any fight for granted. I know I have a lot of skills and talent left in me and I’m looking forward to showing that to the people. I’m here to show the people what I can still do and want to walk away from this tournament being the champion. I know there are people still skeptical about what I can do at my age but I actually get excited when people mention my age and focus on my age because that means they are not focused on my skills and what I bring to the table.”

Did Hopkins ’ win over the weekend give you some inspiration?

“(Laughing) Bernard fought a wonderful fight and congratulations to him for the win. I knew he was definitely going to win the fight but I didn’t know if he was going to get a decision. Kudos to him. He’s definitely an inspiration to us old guys.”

Do you think you’ll get a rematch with him?

“I don’t know. I want it. I don’t know if Bernard wants it though. I just have to take it one fight at a time and not be the problem and we’ll see what happens.”

“I think we have a terrific fight ahead of us. Carl Froch is a tremendously exciting champion and has only been in good fights and the same could be said of Glen Johnson.

“I think Carl Froch is one of the most under appreciated champions in the world. He’s a tremendous talent and has great flair in the ring and a lot of pizzazz outside of it. I’m just a big fan of Carl Froch.

“As many have said before if you don’t like Glen Johnson then you don’t like boxing. I think he’s one of the most widely respected fighters in the game. There’s not another fighter in the game who doesn’t respect Glen Johnson. He’s a road warrior who’s once again on the road in New Jersey . You never know what an old mad can do which is what Bernard Hopkins just showed.”