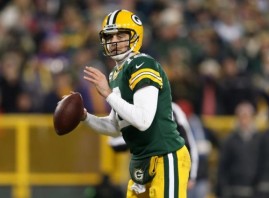 Green Bay Packers – As long as Rodgers is healthy, Mike McCarthy should feel comfortable in knowing that he’s fielding a contender. Greg Jennings is gone, but Randall Cobb has the look of an emerging star. Second-round pick Eddie Lacy is expected to energize a floundering ground game. That said, the offensive line is once again shaky, and the defense has holes that will be exploited by potent offenses.

Player in the spotlight: Eddie Lacy – DuJuan Harris is done for the year. James Starks is, well, James Starks. Alex Green is just a guy. Johnathan Franklin is struggling to adapt to the professional game. That leaves former Crimson Tide bruiser Eddie Lacy to carry the load at running back. Problem is, Lacy’s punishing style makes him conducive to frequent injuries. On the plus side, Lacy is tough as nails. He might not last the season getting 25 carries, but in a pass happy attack, he probably won’t have to.

Fearless forecast – Rodgers by himself is good for six wins. However, the schedule is a minefield: 49ers, Falcons, the AFC North and NFC East. It wouldn’t be at all surprising to see an 8-8 dip, but 10-6 sounds more appropriate.