You are here: Home NHL Ex-Flyer Captain Mike Richards Is Coming To Terms With Move To Kings 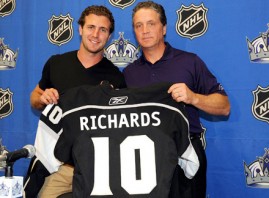 Mike Richards was surprised when he heard the news that he was being traded away from the Philadelphia. The NHL All Star and NHL record holder (most 5-3 short handed goals, 3) was the captain for the Flyers when he got the call he was being traded to the LA Kings, but a month later he is still confused about why he was traded. Richards said “I’m not exactly sure why I was traded. There’s a lot of stuff written in Philly, but it was a big shock to me. Philadelphia tends to maybe blow things up a little more than they are.”

The main rumor going around was that Richards didn’t have any solidarity in the locker room, and that is something he strongly disagrees with. A paper in Philadelphia wrote a story about a pledge that Coach  Laviolette wanted his team to take called ‘Dry Island.’ In short, he wanted the team to stop drinking for a month in the name of camaraderie. The article said that Richards and Jeff Carter scoffed at the pledge, and didn’t want to take part in it over the past two years. Richards implied that it is coming out as an attack on his character, but was quick to point out that it was just a tool in the locker room and not pointed at anyone. In fact he said he was surprised to here it in the press at all,  ”That started out as a friendly, fun thing that you can joke about in the dressing room, just something to bring the team together. I was pretty mad at first. Usually when you have a dressing room, what happens in the dressing room stays in the dressing room. You need that camaraderie to do your best on the ice. I was pretty mad it got out.”

LA Kings General Manager Dean Lombardi said he wasn’t worried about the character of Richards at all, and went on to say he wasn’t even worried when he heard that Richards was upset he was leaving the Flyers. Lombardi said that is the type of emotion and attachment he wants in all of his players. He explained “If I get a guy who wants to be traded, that’s usually not good. I want a guy who has worn that jersey with his heart on his sleeve. My experience is that when a guy is hurt that he’s been traded, it’s a tough first call, but that guy will eventually have that same feeling for your organization.”

Now that Richards has worked out with the team, including Simon Gagne which could become a power house match up for the Kings, he is starting to really enjoy the move. Richards said “You start thinking, ‘This is not a bad place to be, and not a bad place to restart a career.I always used to love coming to L.A. to play. There’s just a buzz in the arena, almost like it is in New York. I can’t wait to feel it from the other side.”

LA Center Jarret Stoll says the moves are making everyone more confident on the team, and outside the team as well. He boasted “I’ve talked to guys on other teams, and they’re excited about our team when they don’t even play for us. They say to me, `Wow, you guys look good.’ And we do, on paper. I think it will be there on the ice, too.”