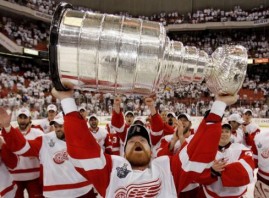 Today Kris Draper became the third player to retire from the Detroit Red Wings since the end of the 2010-11 season. The 17 year veteran was part of four Stanley Cup teams, and he becomes one of 5 players to have retired with more than a 1000 games with the Wings(Draper played in 1,137 games.) Also on that list is Red Wing Legends Gordie Howe, Alex Delvecchio, Nicklas Lidstrom , and Steve Yzerman.

In a press conference this morning Kris Draper took time to thank everyone who believed in him over the years, and talked about Hockey being a dream come true. Draper said “I loved everything about the game and everything about the Red Wings and that’s why I’m going to miss it so much. I know how fortunate I am to play this game, to live my dream out. I had one dream and that was to play in the NHL. I never thought I was going to last this long, never thought I was going to be with the greatest organization in the world, the Detroit Red Wings.”

Few remember the way that the Red Wings acquired Draper. After playing only a short time with the old  Winnipeg Jets, the Jets decided to let him go. The Detroit franchise reached deep into their pockets and paid one dollar for Draper who would eventually become a key member in the “Grind Line.” Draper thanked them too, “I want to thank Bryan Murray and Doug MacLean for making the blockbuster trade to acquire me from Winnipeg for that whopping one dollar.” He continued by saying that he enjoyed the thought of being traded, but had his doubts that he had to overcome. He said “I remember every time I saw a coach or management, if I was on the bike or in the weight room, I started doing more reps, started riding the bikes. I wanted them to hear how hard I’m working. I didn’t want to go away. I didn’t want to leave this building, I didn’t want to leave this organization. I was motivated. It’s been unbelievable. I consider myself one of the luckiest athletes of all time to be able to play with this organization for 17 years.”

Draper still won’t be leaving the Red Wings, he will stay on with the team and be a part of their front office according to General Manager Ken Holland. Holland boasted about Draper, “Kris Draper has represented the Detroit Red Wings with nothing but class and dedication for the last 17 years. His extraordinary work ethic has provided a great example for all players within our organization and his influence on the young players in our system will be felt for years to come. I cannot thank Kris enough for all he has done for us. He is a true professional.”

Holland said he has mixed emotions about Draper retiring, but knows that he will be apart of the franchize for a long time. He said “On one hand it’s a sad day, but on the other hand it’s an exciting day because Kris is going to stay in our organization. With all his intangibles and all the things that Kris has stood for throughout his career, he’s going to bring that to the rink every day in the front office and I really think he can carve out a tremendous career in the front office.”

Wings Owner Mike Ilitch said acquiring Draper was the best dollar he ever spent in as owner of the club. Ilitch said “I never dreamt that I would get a player like Draper for the cost of a smoothie at McDonalds, but it happened and we’re very, very lucky about it.” He continued by sharing some of things Draper did for the Wings, “Kris is a big asset for the Detroit Red Wings from the standpoint of not only being a great hockey player but a great person and he wants to help everybody. He helped our amateur program tremendously. Gordie Howe, going way back when we got started in the ’60s, he was there and he helped us and gave us a lot of spirit to keep going with the amateur program, and along comes Draper after Gordie is gone, and I finally had to get to my people and say leave him alone, he’s got to have a life. He can’t say no and you’re taking advantage of his kindness and wanting to help.”

Draper doesn’t have an official title yet, but he is already setting goals and being a role model for the club. He said “I talked to Steve Yzerman on the drive in here. When Steve left the game, how he worked with the organization, he brought the passion that he brought every day to the rink as a player, he did that at the next level and now look at him with Tampa. Now I have challenges and there’s goals, and I like being a goal-oriented person, and I’m going to set goals for myself.”