You are here: Home NHL Patrick Kane To Undergo Surgery On Wrist Fracture 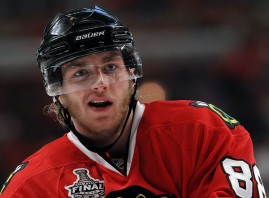 Chicago Blackhawks forward vowed to take his game to the next level in the off season, and those plans have been put on hold due to a wrist fracture. Team doctor Dr. Michael Terry released a statement on Friday discussing the matter. The only good news is that they don’t expect any long term issues from it, Dr. Terry said “Patrick Kane sustained a left wrist injury which came to light recently during his off-season training. He will undergo surgery on Tuesday to repair a scaphoid fracture. We anticipate a full recovery in 6-8 weeks and in time for training camp. We do not anticipate any long-term issues.”

Kane said he had an ‘is what it is’ attitude toward it now, but he was initially upset about it when he heard the news of the fracture. He said “Obviously I was sad about the news (at first), but at the same time, from what I’ve heard from the doctors and Stan and Joel, it’s definitely something you want to fix. I’m happy we’re doing it now rather than when we’re coming to training camp and then I’d be out two months after that.”

The number 1 pick in the 2007 entry draft was trying to stay as positive as he could, but admits he is always trying to evolve and improve. Kane said “I feel good. I put a lot of time and effort in this summer to get myself to where I need to be. I told a lot of people that I’m going to try and make that next step next year and that’s something I’m still intending on doing. I’m still trying to become the best player I can be.”

Kane said he wasn’t sure where or when he injured his wrist, but he admitted that it was sore during the playoffs, but the x-rays came up negative. He explained “It’s something that was bothering me in the playoffs a little bit. We checked it out and there was no fracture. I knew something was wrong, so I’m guessing that working out and skating, shooting the puck, those kinds of things where I put a little more pressure on it probably made it a little bit worse.”

Head coach Joe Quenneville was happy with the progress Kane has been making, and said there were many things he still could do to keep training. Coach Q said “He looks good and I still think he can do a lot of other things to prepare as he’s going along. We anticipate him being ready to start the season, so that’s good news.”

With Kane being on the shelf the Hawks have to prepare for the worst, and that means getting a deal done to keep Patrick Sharp on the team. Sharp is trying to be optimistic about the whole thing, and he said its already on the record where he wants to play hockey next season. Sharp said “I really don’t have much to say about it, to be honest with you. I’ve stated that I want to stay here. Hopefully the organization wants me to stay, and besides that I’m not really going to focus on it. I’m just going to try and be the best player I can be and be a good teammate and let those things kind of sort themselves out.”

Chicago’s General Manager Stan Bowman said hockey is the type of sport where you can have a core group of a lot of players, and ominously made statements that they have already locked up the core of the team. “You can’t have a core group of 20 guys. It just doesn’t work that way in the sport of hockey or in other sports, for that matter. We try to identify the guys that are instrumental in being here in the short term and the long term. We’ve done that. We’ve locked those players up and that’s kind of the nature of sports.”