You are here: Home NHL Stamkos Re-Signs With Lightning: “No Other Options Considered” 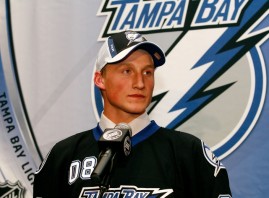 When the Lightning hadn’t signed Steven Stamkos by July 1st, which technically made him a free agent at the time, the rumors began to fly. Some said he was trying to get out of Florida and wanted to play for the Flyers. Some said he wanted to play near his home town and would sign with the Maple Leafs. I mean, who wouldn’t want a 21 year old player who has 98 goals in two seasons?

With hockey being a few months away, the rumor mill was in full swing and never let up. However, Stamkos has now said there was no point in time where he even thought of playing for another team. Now that Stamkos and the Lightning have a signed a 5 year extension to his contract he is talking about it. He said “Being from the Toronto area and being back there in the summer, I heard a lot about the rumors, especially when it went by July 1. We said were going to keep things out of the media from both sides, so it was tough trying not to come out and say don’t worry, things are going to get done. At the end of the day, my family and I knew this was going to get done. It was nothing I lost sleep over.”

General Manager Steve Yzerman echoed the same sentiments, and added that Stamkos was committed to playing in Tampa at all points in the negotiations. He said “We started this process back in November. From Day 1, there’s never been anything but honest, good-faith negotiation and at no point was there any concern from either party that the idea wasn’t to get Steven signed to a long-term extension. From Day 1, Steven and his representation expressed that he wanted to play in Tampa. He’s happy here and loves it here and wants to continue playing here. That’s a big reason why we’re here today.” Yzerman concluded “I’m very pleased to be able to do that and get it done relatively early in the summer. That allows Steven to focus on his training and prepare for the upcoming season.”

This whole thing is new ground for Stamkos. He signed a three year deal as a rookie, and this is the first time he has been to the table to negotiate in his career. Stamkos said “Your rookie contract is pretty much set in stone. You don’t have much say. This was a new experience for me. It went relatively smooth. I’ve been able to grow here for three years. The first couple years were tough, but we’ve been able to grow through it. Basically, it was just a matter of getting things done with Tampa. There were no other options explored.”

One thing is for sure, Stamkos is excited about coming back after the season he had last year. He now has plenty of new experiences to draw on, and a new level of confidence. He said “We had a tremendous run last year. I got a taste of the playoffs and being so close, being able to grow with the core bunch of guys that we have here and see the fans and how great they were and the support we got throughout the whole community, there was no other place I’d rather be than here in Tampa.”