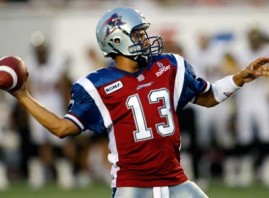 The most exciting professional football game on Thursday night will take place in Canada, and I’m not talking about the NFL Exhibition game between the Indianapolis Colts and the Buffalo Bills at Toronto’s Rogers Centre.  In Montreal, the hometown Alouettes will host the Winnipeg Blue Bombers in a crucial Canadian Football League matchup between the #2 and #3 clubs in most power rankings.  The Als are off an ugly 37-22 loss to the Toronto Argonauts last week, while Winnipeg lost to the Hamilton Tiger Cats 39-28.

One of the great mysteries of life is why CFL football doesn’t get more coverage here in the United States.  With dozens of dedicated sports TV networks looking to fill hours of programming, you’ll see competitive eating, aerobics and cheerleading tournaments and poker ad nauseum.  What you’ll see very little of is CFL football, which is a shame since the Canadian game is a very entertaining brand of professional football.

An even greater mystery is why more American sports betting enthusiasts don’t play CFL football.  From the standpoint of a sports handicapper, it’s an almost perfect betting sport.  It’s big enough that virtually every sportsbook in Nevada and offshore book CFL games so finding ‘outs’ to bet and a competitive line marketplace is possible.  At the same time, it’s not a big enough deal that bookmakers put a huge emphasis on CFL linesmaking.  This means that the player can frequently find good wagering value on CFL games—there’s plenty of statistical information available and unlike many ‘international’ sports you can find a wealth of good CFL news and commentary in English.

Ironically, the sparse amount of CFL coverage in the United States may work in favor of the handicappers and players.  The general public has a perception that CFL football is like an outdoor version of arena football, with passing on every down and scores that resemble basketball games.  While the game does have differences from the NFL game and there are high scoring shootouts, it’s still football.  Not every game is a shootout, rushing and defense is important and for these reasons you can frequently find good value just by playing underdogs and the ‘Under’.

That’s the case here—Montreal’s offense has been erratic this year and making things worse at the moment is Alouettes’ QB Anthony Calvillo is playing with an injured finger.  We won’t go crazy with a matchup breakdown since this game is at its essence pretty simple to handicap—this should be a tight game between fairly even teams and we think both the pointspread and total is too high.  We’ll bet accordingly.