You are here: Home Other Harvick Cashes NASCAR Betting Tickets With Win At Michigan 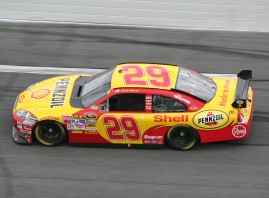 Kevin Harvick has had a considerable amount of success on the NASCAR Sprint Cup circuit since he took up the unenviable challenge of stepping into the ride vacated by the death of the legendary Dale Earnhardt, Sr.  Harvick quickly rose to the occasion, winning his first NASCAR race just three weeks after taking over ‘The Intimidator’s’ ride and has gone on to win 14 races at stock car racing’s highest level of competition.  He’d never won at Michigan until Sunday when a fortuitous late race pit call allowed Harvick to take the checkered flag in the CARFAX 400.

It took Harvick 20 races to finally get to the Michigan International Speedway winner’s circle.  He hadn’t raced badly at the track, with a best finish of 2nd in 2003 and 6 top tens but just hadn’t been able to put himself in a position to win.  His crew chief Gil Martin gave him that opportunity on Sunday, opting to stay out on the track during a late race caution rather than pit for fresh tires.  After the restart, Harvick methodically worked his way around leader Denny Hamlin with ten laps remaining and held on for the victory.   The victory clinches a ‘Chase for the Championship’ berth for Harvick’s team, and after the race he credited the decision to stay out on the track as the reason for the win:

“That was a big decision to stay out but we had such a fast car today. This year has proven we can compete nearly every week when we show up at the track. I can’t say enough about Richard (Childress) and what he does to help turn this team around and I’m hoping we can just keep this up as we head into the Chase.”

Harvick started 8th on Sunday and the victory further underscored the importance of a good qualifying run at Michigan.  In 83 Sprint Cup races at the track, the winner has come from further back than 25th only four times.  53 of the 83 winners have come from the top five starting positions, and 65 from the top ten.