You are here: Home Other Red Sox Owners Hope To Buy Liverpool 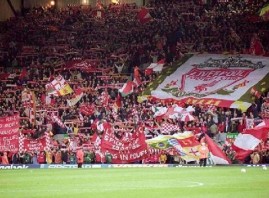 English Premier League mainstays Liverpool have suffered through a recent run of under performance on the field and are deeply in debt off the field.  The current owners, Tom Hicks and George Gillett Jr., are hugely unpopular with Liverpool fans for these reasons, combined with the fact that they’re American and insanely incompetent.  Hicks and Gillett have been shopping the team for nearly a year now, and a board set up to facilitate a sale are prepared to accept an offer from Boston  Red Sox owners John Henry and Tom Werner.  Unfortunately there’s still some legal roadblocks–thrown into the process by Hicks and Gillett themselves.

Hicks and Gillett assembled a board to try and sell the club, and they’ve approved the bid from the Red Sox ownership.  The English Premier League has also indicated that they’ll quickly approve Henry and Werner’s purchase.  The problem is that Hicks and Gillett are trying to muck up the process and claim that both the Henry/Werner bid and a competing bid from an Asian interest drastically underestimate the value of the English Premier League team.  The prevailing wisdom is that they’re trying to ‘hold up’ the Henry/Werner bid to extort some more money out of the process than they might otherwise receive.

“We need to go to the court to … declare that we did act validly in completing the sale agreement, and then the buyers can complete the sale.”

Broughton said Liverpool could default on its obligations if the immediate sale of the team is blocked or delayed:

“We don’t have the capacity to repay our loans. I don’t want to speak for RBS and what they plan to do at that stage. It would be serious. The impression I get from the fans is they would actually swallow that to get rid of the owners, but we don’t want to swallow that.”

Broughton is hopeful about the new ownership group and points to parallels between the Red Sox and Liverpool in expressing his optimism:

“If you look at the Boston Red Sox as a massive example of taking a major, historic team which had seen better days and restored them to glory, it is a parallel which demonstrates action”

An important component of this rebuilding effort is an improvement of the 45,000 seat Anfield Stadium:

“At Fenway they chose not to build a new stadium — they will want to make sure that they do the right thing, [but] we will have a stadium which holds 60-odd thousand. Whether that is the new stadium as designed or not, that is not a commitment, but will we have stadium development? Yes.”

So far, Henry and Werner have declined comment on the purchase or the legal issues surrounding it.  It remains to be seen if Hicks and Gillett have any basis by which to delay the sale.