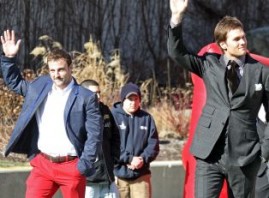 The New England Patriots made the trip to Indianapolis this morning in preparation for next Sunday’s Super Bowl matchup against the New York Giants. They were sent off on their trip by over 25,000 fans who filled Gillette Stadium for a ‘pep rally’ of sorts. The Patriots’ team plane arrived in Indy around 5:00 PM Sunday afternoon.

“It’s a great honor to be representing the AFC and New England in the Super Bowl. We’re really excited about the trip, appreciate the support. I’m sure we’ll see some of you out in Indy. Go Pats.”

“Coach Belichick told us not to come out here and talk too long. We’re going to the Super Bowl!”

“I want to thank you all for coming here today and giving us the warmest welcome in the history of this team, our send-off out to Indy, where we intend to do business.”

The team had a gift for Kraft–a picture of his late wife Myra Kraft, who died last July:

“You all know I am a great believer in spirituality, and I know that a lot of you, just like our family have suffered losses over the last 12 months of dear ones. And I want you to know that they are ardent Patriot fans, and they’ve all been smiling down on us over this past year.”

“But especially this last game in this stadium I saw one smiling face along with your dear ones, making sure that things worked out the way we wanted at the end of the game.”

The Patriots are -3 or -2′ point Super Bowl betting favorites depending on which sports book you check.