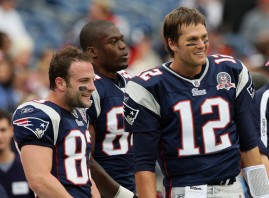 The NFC playoff upsets of last weekend definitely took their toll on Super Bowl betting futures numbers at sportsbooks worldwide. Heading into the weekend, the betting favorites to win the Super Bowl had been the defending champion Green Bay Packers and their NFC rivals the New Orleans Saints. The expectation was that the two offensive powerhouses would meet at Lambeau Field in the NFC Title game in what would be a de facto Super Bowl championship matchup with the actual game in Indianapolis being a mere afterthought.

It didn’t quite work out that way. The upstart San Francisco 49ers upset the Saints on their home field at Candlestick Park to advance to this weekend’s NFC Championship game. That was nothing compared to the upset that took place on Sunday, as the New York Giants dominated the defending Super Bowl champions on their home field to advance to the NFC championship contest which will be held in rainy San Francisco and not chilly Green Bay.

The AFC Playoff bracket held better to form with the New England Patriots obliterating overmatched Denver and the Baltimore Ravens outlasting the Houston Texans. The chaotic weekend has left the New England Patriots and their potent, Tom Brady led offense as the betting favorite to win the Super Bowl championship. The Patriots are currently a +110 betting favorite to take another Lombardi Trophy.

After that, it’s a wide open field. The winner of the NFC Championship–no matter who it is–does have some respect in the marketplace. San Francisco is +330 to win the Super Bowl while their NFC rivals the New York Giants are +340 to pull another improbable title victory. Bringing up the rear of the field is the Baltimore Ravens, priced at +650 to win their second Super Bowl title in franchise history.

As is always the case in sports betting–and particularly in futures betting–shop these prices around if you’re looking to take a position on one of these teams. The prices quoted above are available at most sports books in Nevada and offshore but there are individual variations from ‘shop to shop’. These differences may seen of little relevance, but some shopping can put more profits in your pocket.