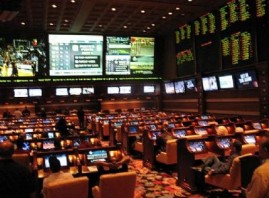 In our last Super Bowl betting update we suggested that there might be some support for the Patriots in the betting market. We’re still waiting. The public keeps betting the Giants and so far there’s been little movement in the line. It’s hard to determine if this is due to enough Patriot money keeping things in balance or whether bookmakers are hesitant to move it off the key number of 3 and risk a ‘middle’–a situation where the final score lands exactly on the point spread and the worst possible scenario for sports books.

The Super Bowl XLVI betting line opened almost immediately after the end of the NFC and AFC championship games and installed the New England Patriots as a -3′ point favorite. Not surprisingly, the early action came in on the Giants. Most likely this was ‘sharp’ money looking to grab the best price–and the all important half point to cover the key number of 3. If you’ve been paying attention, you’ve learned that 3 is the most common margin of victory in NFL games and by getting the opening line the Giants’ backers would win in the event of a Patriot victory by last second field goal.

What was surprising is that the Giants’ money kept coming. Many books started to employ a moneyline along with the pointspread which allowed them to try and keep the money in balance without having to move the pointspread off of three. Currently, the most common pointspread at sports books in Nevada and offshore is New England -3 +100. That means you’ll lay even money on the Pats but will have to lay -120 if you want to take the 3 with the Giants. Quite a few books have moved the line to -2′. Once again, most books are employing a money line at this price as well. For example, if you want to bet the Patriots at the Mirage in Las Vegas you’ll have to lay -125 -2′. Conversely, if you want to bet the Giants you’ll get only +2′ (and a loss in a 3 point game) but you’ll be paid +105.

At this point we still expect to see some late money on the Patriots. The sharp money backing the Giants got into the marketplace early and with the public continuing to bet New York there’s no reason for New England backers to rush to get their bets down.