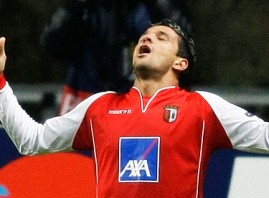 Group E
AS Roma 3-2 Bayern Munich: Bayern entered the match with the group’s top spot wrapped up, so you can’t really fault it for easing up after taking a 2-0 lead via a first-half brace by Mario Gomez. With its hold on second place slipping away, Roma stormed back after halftime. Marco Borriello got the home side back into the match with a goal in the 49th minute before Daniele De Rossi equalized in the 81st. Francesco Totti stepped up to the penalty spot and knocked home the winner three minutes later to earn all three points.
FC Basel 1-0 CFR Cluj-Napoca: Basel made up for its earlier defeat at Cluj, but had to wait until the final whistle to fully secure the points which keep its hopes alive for advancement. Federico Almerares netted the winner in the 15th minute and Cluj managed just five shots in the match with none threatening the goal. Second spot in the group is still a long shot, but Basel likely wrapped up third place.
Standings: 1. Bayern Munich (12), 2. AS Roma (9), 3. FC Basel (6), 4. CFR Cluj-Napoca (3)

Group F
Spartak Moscow 0-3 Marseille: Marseille strolled into the knockout phase of the tournament in surprise fashion, putting the match away within the first hour. The teams were tied on points to start the day, though Spartak held the advantage having won at Marseille already. The upper hand changed quickly when Mathieu Valbuena opened the scoring in the 18th minute. Loic Remy essentially ended it in the 54th minute before Brandao scored in the 68th minute just after Spartak was reduced to 10 men.
Chelsea 2-1 MSK Zilina: The Blues kept their perfect record with a comeback victory over pointless Zilina. Bello Babatounde struck a shock opener in the 19th minute for lowly Zilina, adding to Chelsea’s recent misery, but the home side’s overall dominance finally paid off in the second half when Daniel Sturridge evened the score in the 51st minute and Flourent Malouda won it in the 86th. The game was rather meaningless overall, though Chelsea officially won the group with the result.
Standings: 1. Chelsea (15), 2. Marseille (9), 3. Spartak Moscow (6), 4. MSK Zilina (0)

Group G
Auxerre 0-2 AC Milan: A pivotal match turned just after the hour mark when Zlatan Ibrahimovic found the net from long range to give Milan the upper hand in an otherwise listless affair. Ronaldinho scored in the 90th to secure the points and a spot in the knockout stage. Auxerre has work to do to even make the Europa League now.
Ajax 0-4 Real Madrid: Despite having already clinched advancement and facing Barcelona in a matter of days, a full strength Real side played for the top spot in the group and took it easily at Ajax. Karim Benzema and Alvaro Arbeloa each scored in the opening half, and Cristiano Ronaldo added two more goals to his growing tally in the second.
Standings: 1. Real Madrid (13), 2. AC Milan (8), 3. Ajax (4), 4. Auxerre (3)

Group H
Braga 2-0 Arsenal: Braga sniper Matheus scored two late goals to stun Arsenal and keep its hopes for second place alive. Arsenal controlled the match, but appeared almost begrudged to have to actually earn the points until Matheus struck twice on the break in the final minutes. The Gunners were unlucky to not be awarded a penalty and Emmanuel Eboue was off the pitch receiving treatment for an injury when Braga took the lead. Another surprise turn of events will have to take place for Braga to overtake Arsenal, but the Gunners still haven’t secured anything other than a top three finish in the group.
Partizan Belgrade 0-3 Shakhtar Donetsk: Shakhtar scored three times in the span of 16 second-half minutes to take control of the group and all but wrap up advancement. Taras Stepanenko opened the scoring and was followed in relatively quick succession on the ledger by Jadson and Eduardo. The Ukrainian side only needs to avoid a loss by four-plus goals versus Braga to move on.
Standings: 1. Shakhtar Donetsk (12), 2. Arsenal (9), 3. Braga (9), 4. Partizan Belgrade (0)