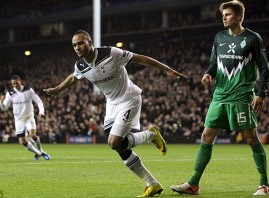 Group A
Inter Milan 1-0 Twente Enschede: Inter used a goal from Esteban Cambiasso in the 55th minute to shake off their poor recent form and advance out of group play. Despite controlling the match, Inter needed nearly as hour to get the goal and held on from there. Twente is sure to finish third and advance to Europa League play.

Tottenham 3-0 Werder Bremen: Spurs continued their exciting play with a straightforward win over strugglers Werder Bremen. Younes Kaboul scored his second goal in as many matches in the 6th minute and Luka Modric doubled the lead just before halftime. In the second half, Gareth Bale surprisingly missed a penalty kick and Peter Crouch scored in the 79th minute. Tottenham has a chance to secure first place with a win in its group finale.
Standings: 1. Tottenham (10), 2. Inter Milan (10), 3. Twente Enschede (5), 4. Werder Bremen (2)

Group B
Hapoel Tel Aviv 3-0 Benfica: Benfica blew a chance to stay even on points with Lyon by falling to a shock defeat in Israel. Despite a bright start and plenty of chances, the side from Lisbon was undone by an Eran Zehavi brace. Zehavi scored in the 24th and 90th minutes with Douglas Nunes finding the net in the 74th, leaving Benfica with work to do just to guarantee a spot in Europa League.

Schalke 04 3-0 Lyon: A dominant opening half sent Schalke through to the knockout stage when Jefferson Farfan opened scoring in the 13th minute and Klaas-Jan Huntelaar added on in the 20th minute. Huntelaar scored again in the 89th to send the German team first in the group. Lyon also secured advancement thanks to Benfica’s loss and a better head-to-head goal differential.
Standings: 1. Schalke 04 (10), 2. Lyon (9), 3. Benfica (6), 4. Hapoel Tel Aviv (4)

Group C
Rangers 0-1 Manchester United: An 87th-minute penalty from Wayne Rooney in his Champions League return was enough to send United through to the next phase of the competition. Rangers were in dire need of a victory, but couldn’t find the breakthrough. Rangers will finish third in the group and play in the next round of Europa League play.

Valencia 6-1 Bursaspor: Los Che scored four times in the opening half and five times within the first hour to embarrass Bursaspor and send the Turkish team out of the Champions League. Juan Mata opened scoring with a penalty in the 17th minute before Roberto Soldado (21st), Aritz Aduriz (30th), Joaquin (37th), Soldado again (55th), and Alejandro Dominguez (78th) added insult to injury. Valencia can win the group with a victory of more than a goal at Old Trafford.
Standings: 1. Manchester United (13), 2. Valencia (10), 3. Rangers (5), 4. Bursaspor (0)

Group D
Rubin Kazan 1-0 FC Copenhagen: Facing a must-win situation, Rubin Kazan got a penalty kick from Christian Noboa in first-half injury time which stood up in a huge win over Copenhagen. The win means Rubin Kazan can advance with a victory over Panathinaikos and a Copenhagen loss or draw at Barcelona. The Russians are guaranteed at least a spot in the next round of the Europa League.

Panathinaikos 0-3 Barcelona: Barca was hardly threatened by Panathinaikos and clinched top spot in the group ahead of Monday’s El Clasico. Pedro scored in the 27th and 69th minutes with a rampant Lionel Messi adding a goal in the 62nd. Panathinaikos is condemned to an exit from European competition for the season.
Standings: 1. Barcelona (11), 2. FC Copenhagen (7), 3. Rubin Kazan (6), 4. Panathinaikos (2)