You are here: Home Uncategorized Alistair Overeem: Werdum Has Grown, But So Have I

Alistair Overeem: Werdum Has Grown, But So Have I 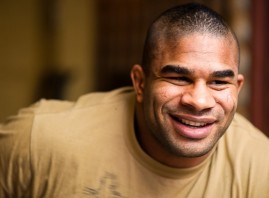 Current Strikforce heavyweight champion Alistair Overeem has been quiet in the run up to the Heavyweight Grand Prix set to launch in Texas in June. Many things have happened in mixed martial arts since we heard from him last, and thats including the buyout of Strikeforce by UFC owners Zuffa LLC.

Many have questioned Overeem’s allegiance to mixed martial arts as he has repeatedly put it on the back burner so he could fight in K-1 (kick boxing.) When you add in the fact how long it took him to defend his Strikeforce title even once, one has to ask the question which does he like more. Overeem said “My main passion is MMA. I’ve done more MMA bouts than K-1, but I do like K-1. It did perfect my striking, but I would have to say MMA. I like MMA just a tad more, that’s why I did some K-1 fights earlier in my career but then I chose MMA.”

First up for Overeem in the Heavyweight grand Prix is Fabricio Werdum. Werdum is coming off of a win that shocked the world when he submitted Fedor Emelianenko in the first round of their fight. It was Fedor’s first loss in ten years! Overeem already fought Werdum in 2006, and suffered a loss when he was submitted by the Brazilian Jiu Jitsu standout. Overeem is very optimistic about the rematch, and he is quick to point out that the loss to Werdum is motivating him. He said “It’s definitely about revenge. For me, believe me, I’m motivated. But he can say whatever he wants, I know I’m going to be prepared for this fight. I’m very motivated. Keep talking, I ain’t listening.”

Overeem went on to say that Werdum has in fact evolved as a fighter, but he has evolved as well. Overeem said “Fabricio Werdum is a very good grappler, maybe the best grappler in MMA to date at this time, he’s grown since our last encounter, but so have I. I think I’m better now. I’ve grown more than he can anticipate. I’m better on the feet, I also think I’m better on the ground, so I’m pretty confident that I’m gonna get him.”

Now that Zuffa owns Strikeforce it opens up the possibility of the fighters fighting each other. Although many believe those days are far off in the future, Overeem admits he has thought about the people he would like to fight under the UFC banner. Some for personal reasons, and some for the challenge they present. UFC heavyweight Junior Dos Santos said he had many questions for Overeem because of how fast he grew in such a short amount of time. Junior was basically accusing Overeem of using performance enhancement drugs, and Overeem took note of the comments. Overeem said of Junior’s questions “I have no answer. Like I said, he can say what he wants. I’ve fought numerous times in the states. I’ve always done all the tests, like all the other athletes and I’ve always come through the test negative.”

Who would Overeem like to fight if he could chose any UFC fighter? Overeem’s answer isn’t surprising as he wants to fight the number one heavyweight Cain Velasquez. Overeem said “Cain Velasquez. And why? Because he is the UFC champion, and believe you me when the tournament is over, I’ll be coming for him. And after I’m done with him, we’re gonna go after dos Santos for his nice comment.” Overeem concluded by saying he doesn’t think Velasquez is the number one heavyweight, “Cain is a good striker, good wrestling. He, in my opinion, is not ranked number one. How do I see myself against him? Well it’s gonna be a great fight. He is a well rounded fighter. I think I’m better on the feet, on the ground probably equal. It’s probably gonna be a matter of time, it’s gonna be a matter of time until we see that fight.”