You are here: Home Uncategorized 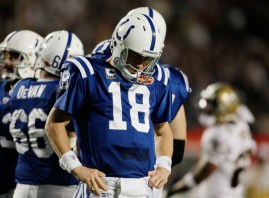 Peyton Manning has yet to officially leave Indianapolis, but his eventual destination should that occur has become a hot topic. Kansas City Chiefs’ head coach Romeo Crennel threw his hat in the ring of suitors this weekend when he said that his team would consider Manning should he become available. Officially, Crennel isn’t supposed to have a position on Manning since for the time being he’s still the property of the Indianapolis Colts. Still, he spoke in general terms about

The Dallas Stars have found a head coach. Stars General Manager Joe Nieuwendyk announced the 31st head coach of the Stars would be Glen Gulutzan. Gulutzan replaces Marc Crawford who was fired after failing to make the playoffs the last

Alistair Overeem: Werdum Has Grown, But So Have I

Current Strikforce heavyweight champion Alistair Overeem has been quiet in the run up to the Heavyweight Grand Prix set to launch in Texas in June. Many things have happened in mixed martial arts since we heard from him last, and

UFC 127: Penn vs. Fitch Weigh In Results and Betting Odds From the Land Down Under

Tomorrow night the UFC goes live for UFC 127: Penn vs. Fitch at the Acer Arena in Sydney, Australia. The featured bout of the night puts the spotlight on former lightweight champ BJ Penn as he continues his comeback in

Tom Kostopoulos of the Calgary Flames was handed down a 6 game suspension, and a 30 thousand dollar fine for an illegal blow to the head of Red Wings defenseman Brad Stuart. The NHL Senior Executive Vice President of Hockey

Around The NHL: Shelley Suspended 2 More Games, Kane Out 2 Weeks

I think someone told Jody Shelley that if he gets suspended 10 times by the NHL he gets a free sandwich and a drink. Big shock here, the Philadelphia Flyers punched Vancouver’s Andrew Alberts who went down faster then a