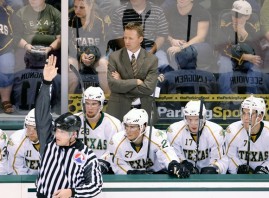 The Dallas Stars have found a head coach. Stars General Manager Joe Nieuwendyk announced the 31st head coach of the Stars would be Glen Gulutzan. Gulutzan replaces Marc Crawford who was fired after failing to make the playoffs the last two seasons. Gulutzan comes by way of the Texas Stars, who is Dallas’s NHL affiliate. Gulutzan enjoyed success at the AHL franchise including a trip to the Calder Cup Finals. Overall, His record is 87-56-17 in the regular season and 16-14 in the playoffs.

Nieuwendyk told the media over a conference call that they were excited to offer the opportunity to Gulutzan after an exhaustive search. He said “It’s an exciting day for us. We went through a thorough search and really had some good candidates that were impressive and it made the decision even tougher. Gulutzan is the right guy for the job and we couldn’t be happier.”

Nieuwendyk said he understands that fans might be apprehensive about having a young coach, 39, who as never coached in the NHL, but he strongly feels he has the ability to be a leader and a coach for the team. He said of Gulutzan, “I was looking for the right guy for the job. I guess it goes back to the youth movement. Even though Glen is young and hasn’t coached a game in the National Hockey League, his strengths are exactly what I feel this team needs, the structure, the style of play. The bottom line is he gets it. He understands players. He understands how to mesh players and get the most out of their abilities.” He continued “I don’t want it to be a misconception that we have a young coach that is good to be with young players. We have a young coach that is going to be our leader and that’s where his strengths lie. Even though he’s young, he has a relationship with our guys. They’re certainly going to know who’s in charge and they’ll play hard for him.”

Gulutzan is obviously excited about the opportunity in front, and mentioned that coaching in the NHL has always been one of his goals. He also said he will be bringing his work ethic and focus to Austin, the same ethic that got him where he is today. He said “I’m extremely excited to be part of the organization. It’s a great opportunity for a young coach. I’m willing to bring work ethic and a real good team-structure game. I think we can do real good things.” He continued by saying he is very fortunate to be where he is, “I enjoyed myself in Vegas. I loved Austin and this is the next step. I feel very fortunate to be here.”

Gulutzan said he had to make changes to his approach to his game when he started coaching in the AHL, and he expects the same thing to happen when he coaches for the Stars. He said “At the end of the day, it’s the same game and the same mistakes are being made. It’s just at a higher level with bigger, stronger players. I can remember my first impression of the American Hockey League and am sure I’m going to have that same first impression come October.” He also said his approach seems to match with the way the NHL is progressing, “The way I describe my philosophy is that I’d like to be a two-way hockey club. The best way to describe my style is just a hard, two-way game that has some tempo. I think that’s today’s hockey.”

The Dallas roster is a young one, and a few of the players have played under him before, and no one is pretending that that wasn’t part of the reason he was given the job. He said “If you’re there with them in the grassroots, you know them as a player. It’s almost like raising a child. I think if you know their past, it’s easier to relate with them and you can help them if you understand their strengths and weaknesses.”