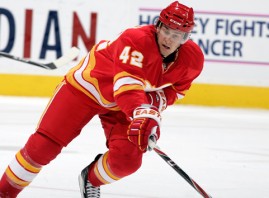 Tom Kostopoulos of the Calgary Flames was handed down a 6 game suspension, and a 30 thousand dollar fine for an illegal blow to the head of Red Wings defenseman Brad Stuart. The NHL Senior Executive Vice President of Hockey Operations Colin Campbell released a statement today outlining the suspension and what went into the decision.

You can see all the angles in the video below, but Campbell said a number of things went into the decision. He said “A number of factors were considered in reaching this decision, Kostopoulos delivered a blow to the head of an unsuspecting and vulnerable player. As well, he targeted the head of his opponent and, while the hit was not from the blindside, the head was the principle point of contact.” Campbell continued “The fact that Brad Stuart was not in possession of the puck when the blow was delivered and the serious nature of the player’s injury were also considered in my decision.”

The Flames General Manager Jay Feaster, and Tom Kostopoulos, released a statement in response to the suspension. Feaster was not only disappointed in the suspension, but the fact that they thought it was an illegal hit as well. He said “We strongly disagree, not only with the length of the suspension, but also with the fact that Tom was suspended. While we are sorry the player was injured, we maintained in the hearing the hit was a legal check. The player was batting at the puck and Tom hit him in the chest and finished his check through him. He did not target the head, and we do not believe the head was the initial point of contact. We respect the difficult job Colin Campbell has to do in these situations, and we appreciate the opportunity we were afforded to present our case; however, we simply do not agree with the decision.”

Kostopoulos expressed his disdain with the ruling as well, and he maintains he did not target the head of Stuart. He said “I’m extremely disappointed in the League’s ruling as I believe I have not done anything illegal. I’m sorry that Brad was hurt on the play and I hope he returns to play soon, but it was never my intention to injure him and I definitely did not target the head. I maintain that I delivered a legal check to an opponent playing the puck. While I am upset with the League’s decision, I will serve the suspension in preparation for my return to the line-up to help my team.”

Meanwhile, Detroit Coach Mike Babcock said you have to make tough calls like this if you expect the players to react differently. He said the play was disgusting, and was “a needless play.” He concluded “If you make a stand hard enough when this stuff happens, this stuff won’t happen.”