You are here: Home Horse Racing Dialed In To Have Knee Surgery

Dialed In To Have Knee Surgery 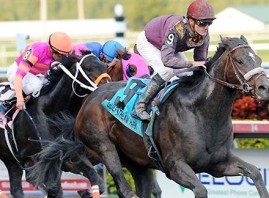 Bad news today for the connections of Kentucky Derby beaten favorite Dialed In. According to trainer Nick Zito, Dialed In will have knee surgery next week and will be out of training for an undetermined amount of time. The prevailing wisdom is that he’ll resume training next year in preparation for his four year old campaign assuming that everything goes well with his surgery.

Zito issued this statement on his colt and its future:

“Dialed In will be out of training for awhile. He has a chip in the right knee. We noticed there was something different with the knee. Dr. Migliacci took some pictures, X-rays, on the 25th of May, which was after the Preakness and there was no problem, but there is now.”

“Dr. Bramlage will do the surgery next week and he will be back in training soon. Bob LaPenta and I, and all my staff, were looking forward to the Travers. Unfortunately, that will not happen. I am grateful that he was the favorite in the Kentucky Derby and ran in the Preakness for the $5 million bonus. But I am disappointed, along with Bob, that he did not get a fair chance in those races. Hopefully as a 4-year-old he will get back to where he belongs.”

Dialed In’s biggest victory to date was in the Florida Derby and he also won the Holy Bull Stakes. He is by Mineshaft out of the Storm Cat mare Miss Doolittle and has a record of 3-1-0 in six career starts with earnings of $939,206. He finished eighth in the Kentucky Derby as the 5-1 post time favorite and then fourth in the Preakness. The original plan for Dialed In was a return to action at the Travers held August 27 at Saratoga. This obviously won’t be the case and represents another defection for what is known as the ‘Mid Summer Derby’. Earlier this month the Travers field lost Kentucky Derby winner Animal Kingdom. The Travers Stakes was first run in 1864 and is the oldest stakes race in North America. It is now a Grade 1 event for three year olds run over a mile and a quarter.