You are here: Home NBA LeBron Second Guesses ‘The Decision’ 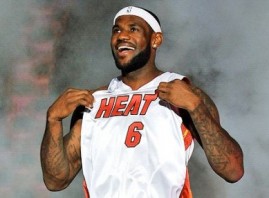 LeBron James is having second thoughts about ‘The Decision’.  No, not the move to Miami as a free agent but the pathetic, self absorbed way in which he announced the move including the TV special dubbed by ESPN as ‘The Decision’.  LeBron talked with New York media market types before the Heat’s game with the New Jersey Nets on Sunday and although he was short on specifics about what he would do differently, he said that he’d do things differently if he had to do it again:

“If I had to go back on it, I probably would do it a little bit different. But I’m happy with the decision I made. There’s always going to be a misunderstanding. I don’t know what I would [have done], but I definitely would have changed it.”

Not exactly a revelatory statement–more like ‘My handlers tell me that my Q ratings are suffering and we’ve got shoes to move, so I’m going to try to come off as somewhat contrite’.  He still doesn’t really get that the problem wasn’t leaving Cleveland and heading to Miami via free agency.  That happens all the time in every sport and in most cases the fans and general public understand that it’s part of the business.  Donovan McNabb was technically traded, but his image didn’t take a hit moving from Philadelphia to Washington.  Orlando fans may not have been happy with Shaquille O’Neal’s decision to head West and play for the Lakers, but they understood it.  ’The Diesel’ still lives in the area and has been well liked by NBA fans throughout his career.  So that ‘there’s always going to be a ‘misunderstanding’ bit is nonsense.

LeBron also went on to say that he didn’t have a preferential ranking of other teams after the Heat:

“Not really. It was some meetings that were better than others. But at the end of the day, this was the team I felt like I had the best opportunity to win for a long period of time. I didn’t have a list, one through six or one through five, whatever the case was.”

He even jokingly said that it’s not to early for teams to start ‘recruiting’ him for when his current deal expires in six years, but then quickly clarified:

That’s probably the endgame here–he still wants to play in New York, so this is the first step at rehabilitating his public image.  He still doesn’t seem to understand that it wasn’t the move from Cleveland to Miami that people found so infuriating, but the entire PR tone deaf and self absorbed way he conducted the process.  Making that announcement on TV as ‘The Decision’ was just the culmination of this train wreck.  At least he didn’t blame the problem on his ‘handlers’ or ‘advisors’.