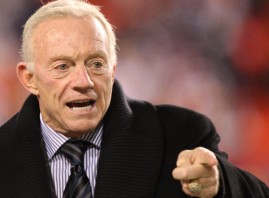 Things keep getting worse for the Dallas Cowboys and we’re not just talking about the fact that John Kitna is currently their starting quarterback with Tony Romo on the shelf.  On Sunday they were on the wrong end of a home blowout to the Jacksonville Jaguars.  The final score of 35-17 doesn’t fully convey how completely non-competitive the Cowboys were in this game.  They entered the fourth quarter trailing 28-3.  The Dallas defense allowed David Garrard to throw for four touchdown passes.  Maurice Jones-Drew, who has been very disappointing this year, ran for 135 yards.  Had he run for 15 more he would have single handedly tripled the rushing output of the entire Cowboys offense.  Kitna threw for 379 yards and a touchdown, but also threw four interceptions.

You know things are bad when an owner doesn’t even bother trying to act optimistic or trying to find the proverbial ‘silver lining’.  In his postgame comments to the media, Cowboys owner Jerry Jones apologized to the team’s fans for having to suffer through this debacle:

“I’m embarrassed. Of course I am. And, to every fan, I should have and do take the ultimate, ultimate responsibility. I do. That’s the way we’re structured. That’s the way I run it. There’s no question that I have the plan and executing it to have the best players and the best coaching that we can have. I’m dumbfounded that we are 1-7.”

“You couldn’t get me to say it, but you know that I thought we had a team here that could be one of the top competitive teams in the NFL. I’m very, very, very sorry to our fans. You should have better than this.”

Jones said the Cowboys are 1-7, but they’re really 1-6–not that there’s much of a difference. Making things even more disappointing for Jones and the fans is the fact that the Superbowl will be played in Dallas this season and he didn’t come out and say it but he sure hoped that the Cowboys would be the first NFL team to play the championship game in their home stadium.  Consider these Jones comments *before* the season:

“I’m like a kid when you ask me what I want for Christmas.  I want it so bad I’m scared to talk about it.”

Right now, Wade Phillips has only two things to be thankful for.  He won’t be fired during the season and unless I misunderstand Texas law Jones can’t legally order him killed.  Jones continued to stress that he’s not going to make any change before the end of the year:

After the season, however, Jones made clear that heads will roll:

“You can tell by the way some of the things that we’ve done to certainly make the Cowboys everything you want them to be, you should be able to tell that I won’t rest until we’ve figured some things out to get us in a different spot. … What it is, I don’t have that.”

I’ve been watching sports for a long time, and I don’t think we’ve ever seen an offseason bloodletting the likes of which we’re going to witness in Dallas.  With the possible exception of the late George Steinbrenner there’s likely never been an owner in professional sports with stones like Jerry Jones.  The guy walked in and fired Tom Freakin’ Landry, for God’s sake.  At the time, it was what needed to be done but you’ve got to have a set to cut loose a walking legend like that.  Wade Phillips and his entire staff are as good as gone, and there’s not really anyone in the organization that can be secure in their jobs.  This includes the players as well as the coaches and front office–Tony Romo *may* be safe, but he’s far from ‘untouchable’.  Dez Bryant is young enough and talented enough that he’ll be back.  As for the rest of the team?  Who knows.   You can be certain that Jones won’t take a half assed or ‘piecemeal’ approach to getting the Cowboys back to competitive form.