You are here: Home NFL Rice, Jackson Still No Locks to Play this Week

Rice, Jackson Still No Locks to Play this Week 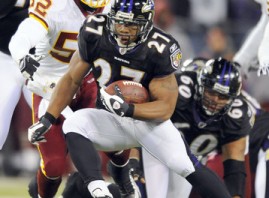 For you Ravens fans, Rams fans, and fantasy owners, it’s time to get a little edgy on their team’s chances today.

Both Ray Rice and Stephen Jackson, two of the most talented backs in the NFL are still questionable leading up to their games.

Rice was limited all week in practice, but did get some reps as he hopes to recover from his knee injury. Without him, the Ravens will go with a mix of Le’Ron McClain and Willis McGahee, both solid options for their teams. When it comes to fantasy, I’d give McClain the slight edge, mostly because he’ll be playing fullback and power back in the redzone for the team.

As for Jackson, he is still a game day decision for the Rams. And since he hasn’t played in practice at all this week, I’d say he’s almost  a lock to be out for the game. If that is the case, Kenneth Darby will be the starter for the Rams, and should be a solid fantasy start for the Rams.