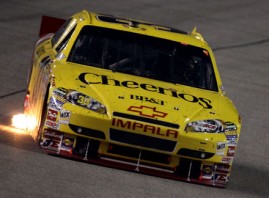 There will be daytime betting action at your favorite sportsbook on Thursday thanks to the NASCAR Gatorade Duel races from Daytona.  The two Gatorade Duel Races will set the starting lineup for this weekend’s Daytona 500 and due to their significance in setting the field for NASCAR’s biggest race of the year are excellent betting opportunities themselves.

As we talked about in our handicap of the first duel, these races will set the starting order for Sunday’s Daytona 500.  Most races d have a very straightforward qualification process–drivers qualify with a couple of laps around the track on Friday with the best times setting the starting order for the weekend’s race.  The Daytona 500, however, has a unique multi-part qualification process that began last Sunday with a time trial similar to one before any other race.  The difference in this case, however, is that only the first two starting positions were up for grabs–Dale Earnhardt Jr. took the pole (more about him in a moment) while Jeff Gordon qualified second.  The rest of the Daytona 500 field is set through a pair of 125 lap races–that’s what we’ve got today.

And thanks to a bad break for Dale Junior these qualifying races are even more significant–Earnhardt wrecked his #88 Chevy in practice yesterday.  He’ll still get credit for taking the pole, but will have to start at the back of the field since he’s being forced to use a backup car.  That moves Jeff Gordon up to the pole position and puts everything from the #2 starting spot back to Dale Junior at the rear of the field.  Thanks to several of the big stars of the sport being in the second race we’ve got a good value opportunity on a driver who isn’t quite as big of a ‘household name’.  Jeff Gordon is one of the betting favorites in this race, but he’s already locked in his starting position due to his qualifying run.  The top choice is Kyle Busch (+425) and Denny Hamlin (+550) but we’ll go down the list a bit and back Clint Bowyer at +850.  Bowyer may not have the name recognition that the aforementioned drivers do, but he’s very good on restrictor plate tracks.  He led both Daytona races last year, won at Talladega and has the highest average finish on plate tracks of any active driver.  He’ll start 3rd in the Duel and is a great value at the price–getting good drivers at value prices is the name of the game in NASCAR betting and that’s exactly what we’ve got here.