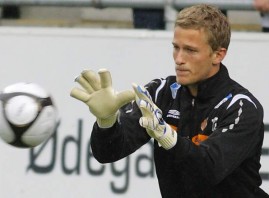 With the seemingly ageless Edwin van der Sar easing into his 40’s and backup goalkeeper Tomasz Kuszczak failing to convince Manchester United management that he should be the heir apparent between the sticks, the Red Devils insist that they will sign Danish netminder Anders Lindegaard in a matter of weeks.

The 26-year-old Lindegaard currently plays for Aalesund AK in the Norwegian Tippeligaen and has earned four caps for the Denmark National Team. Lindegaard has started three of Denmark’s four qualifying matches for UEFA Euro 2012, keeping clean sheets in victories over Iceland and Cyprus, and losing 3-1 in Portugal.

Aalesund AK reportedly sent representatives to Manchester last week to enter into discussions with United over Lindegaard’s future. Both sides have indicated that they are optimistic in reaching a deal for the upstart goalkeeper in the very near future.

While the Red Devils remain adamant that they will sign Lindegaard without hesitation, questions were raised by former United and Denmark goalkeeper Peter Schmeichel regarding his countryman’s ability. Schmeichel was reported to claim that Lindegaard does not meet the high standards expected of a Manchester United footballer.

Though United is not desperate for a goalkeeper at the moment, the career paths of van der Sar and Kuszczak have team officials looking elsewhere with the future in mind. The Dutch star remains a top performer, but is not expected to continue his professional career much longer after having already called it quits on his international career. There have even been instances early this Premier League season that van der Sar’s ability may be slipping ever so slightly.

Kuszczak stepped into a similar situation as Lindegaard is likely to enter into, but has yet to win over United management or supporters with play more solid than spectacular. The Polish goalkeeper’s future at the club could become uncertain with Lindegaard’s introduction, though the picture will become clearer as the season progresses.